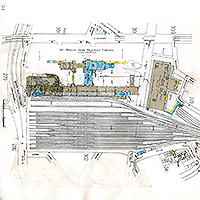 This weekend marks the 75th anniversary of the beautiful Union Station (or Los Angeles Union Passenger Terminal, as it was known back in 1939 when it opened to great fanfare). It seems like the cool old station with the magnificent lobby has always been part of L.A., but the battle to build it was filled with intrigue and more racism than a Donald Sterling rant (too soon?).

The political struggle of that time starred the big railroad faction, which favored an extensive elevated rail system, pitted against folks who wanted one large station that would consolidate Los Angeles’ smaller hubs (ones that served the Union Pacific, the Southern Pacific, the Atchison, Topeka and the Santa Fe railroads along with the Los Angeles Railway System that operated in-town street-railroad cars). Those who favored the consolidated Union station were spearheaded by the powerful Los Angeles Times, which printed plenty of ink on the subject.

This is not to belittle the exhaustive studies done in the late 1920s which included a 600 page report on rail safety (L.A. had one of the worst records in America for crossings) and myriad proposals that did not get the requisite political traction, including one that would have placed the station directly on the Plaza. In a bitterly fought election, Propositions 8 (Union Terminal Plan) and 9 (the Plaza site) narrowly won. The site for the new station was to be right on top of a large portion of old Chinatown that had ironically existed since the building of the railroads out west, the labor of which fell largely onto Chinese immigrants. These were the same Chinese who were systematically mistreated and portrayed negatively by xenophobic locals (many of whom had only been in the city for a short time).

Chinatown was often described as the worst part of town, where lawlessness and depravity went hand in hand. The Times pushed for the destruction of old Chinatown, portraying the project as removing urban blight while bettering transportation in the city. There was plenty of wrangling in the courts over the next decade (see “Los Angeles Union Station” by Marilyn Musicant), and the Union Station design was eventually created by powerhouse architects John and Donald Parkinson (Los Angeles City Hall, the Title Insurance building, the Alexandria Hotel, Bullocks Wilshire, the Los Angeles Memorial Coliseum and others).

While there was much arguing over the location of the future station, there was less complaining about the completed work (seen on the second map), which is as impressive as a building as it is functional as a train hub. The Opening extravaganza lasted three days and what seemed like the entire city showed up to revel in the beautiful new landmark. It is said that Union Station is the last grand railroad station built in America. Starting this week at Central Library, there will be a rather grand exhibit to celebrate the anniversary.