Home Uncategorized CityDig: The Architectural Mystery Known as the Original Hall of Records 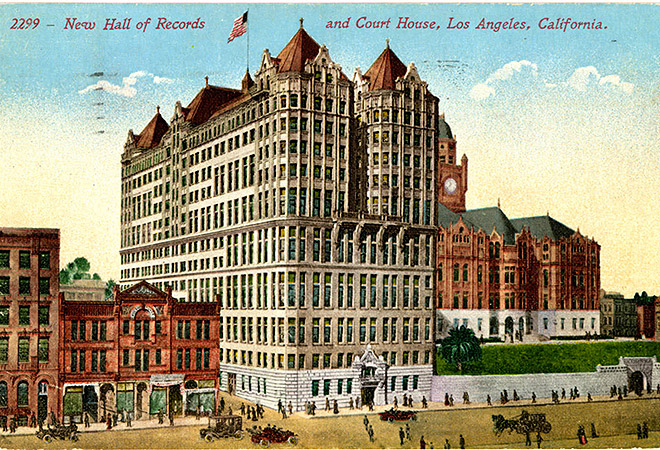 For decades, it was the eccentric old lady of the Los Angeles Civic Center. Standing askew from the surrounding street grid, the original Los Angeles County Hall of Records wore an architectural style that defied easy categorization.

Built between 1909 and 1912 to relieve overcrowding next door in the county’s red-sandstone courthouse, the Hall of Records consolidated most county offices under one lavishly ornamented roof—a showy headpiece that featured finials, pyramidal gables, and copper ribbing. Architects Frank Hudson and William Munsell divided its upper floors into two pairs of wings, which joined at a central elevator shaft, and clad the walls in brick and terra cotta above a granite base.

The Hall of Records acquired its most distinctive quirk in the 1920s. As the image above shows, the building originally stood flush against New High Street. But when the city untangled the maze of streets that once navigated the Civic Center area, it left the Hall of Records standing at an off-angle relative to the new, straightened grid.

That odd stance became a liability in the 1960s, as a new Civic Center composed of modern, monumental buildings and arranged around a long, landscaped Civic Center Mall took form. The county considered saving the building by rotating it to align with the new street grid, but the estimated cost of $5 million was considered excessive. Instead, the wrecking ball came. In 1973, the idiosyncratic Hall of Records gave way to a blacktop parking lot—recently converted into the easternmost section of Grand Park.

Above: circa 1912 postcard showing the Hall of Records on New High Street, courtesy of the Department of Archives and Special Collections, Loyola Marymount University Library.