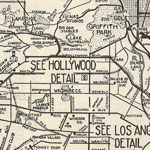 There is something terribly fun about this little pen and ink map created while the country sank into the depression and Los Angeles tried to squeeze tourist money out of the depressed economy. Despite the flattened fortunes of many, the city still had plenty to offer for visitors, as shown cartographically by the fortunate Mister Herbert Edward Floercky. The landscape is covered with activities (600 Things to Do!) including dozens of golf courses and gun clubs alongside several tantalizing animal-focused amusements: Cawston’s Ostrich Farm, the Squab Ranch, the Monkey Farm, Gay’s Lion Farm, Lincoln Park’s Alligator Farm, and Valmont with 30,000 chicks. The range is impressive: from boating, sailing, and fishing along the sweet coastline to skiing in what appears to be Flintridge. For the romantics there is even dancing at the Ambassador or way up on top of Mt. Lowe while rubbing shoulders with the movie stars as shown in their own corner of the map. The lure of the studios also calls out a siren song from Hollywood (United Artists, Warner, Fox, Chaplin), Culver City (Pathe, MGM) and Studio City (Sennett).

Cartographer/historian Herbert E. Floercky changed the face of geographic education in the state of California with his little gem, “A Visual Geography of California,” which was so well received that it was adopted as an official California state textbook and sold 175,000 copies when it was published. Floercky, a research engineer for a steel company, was one of many folks who went broke overnight in the crash of 1929. When his three kids struggled with learning their local history lessons he used his skills learned in research to create maps, graphs, and tables to illustrate their lessons. When he was through, he had managed to tell the story of California history in 84 illustration-rich pages and changed the way kids learned about their state. He also showed how important maps were in getting historical messages across to students. He put that graphic talent to work in luring the rubes out to sunny Los Angeles.

Above: Amusement Map of Los Angeles County Compliments of the Bank of Hollywood By Herbert E. Floercky, 1929.