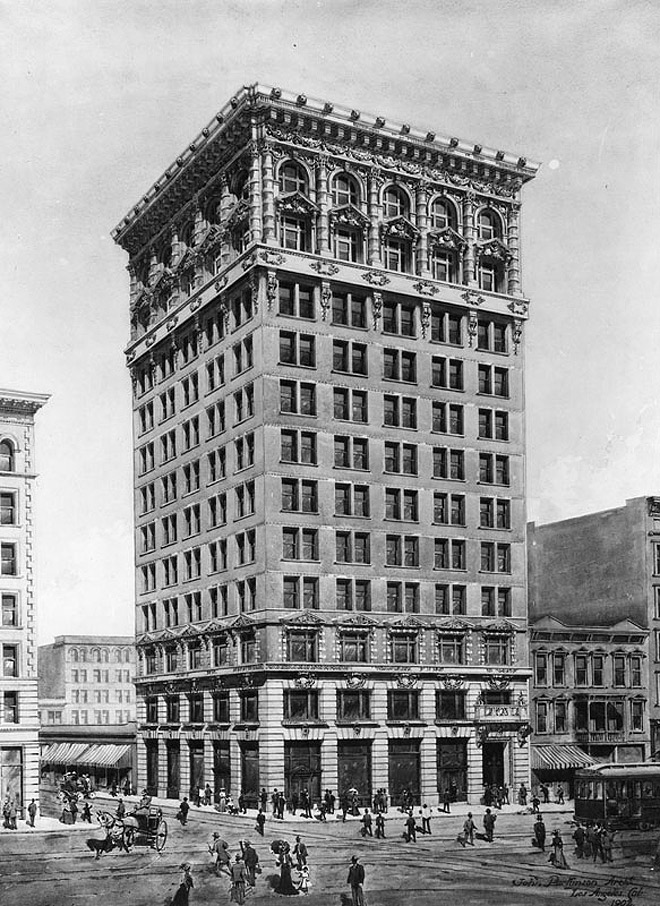 Let’s keep things in perspective. When the 12-story, 173-foot Braly Block opened at the corner of Fourth and Spring in 1904, it was less than half as tall as New York’s 391-foot Park Row Building, and in California San Francisco had boasted a 315-foot office building since 1898.

Still, the Braly Block soared above its surroundings, dwarfing any other building in Los Angeles. Many called it the city’s first skyscraper.

But height wasn’t the Braly Block’s only point of pride—it was also hailed as a triumph of modern engineering and architecture. Its steel-frame construction was still a new concept, and the combination of steel and interior masonry walls promised protection from the fires that threatened the city’s many wooden structures. And while its classical Beaux Arts façade of terra cotta might have looked to the past, inside its amenities looked more like the future: three state-of-the-art elevators, electrical wiring built into the walls, and coat closets in each of the 209 offices.

Known today as the Continental Building, L.A.’s first skyscraper transformed its neighborhood. Occupying its ground floor was the Union Trust Company (John H. Braly, president). The company was among the first financial firms to move onto Spring Street, but other banks soon followed, building their own Beaux Arts towers. Within a few years the previously residential road had become the Wall Street of the West.

Above: A 1902 artist’s rendering of the Braly Block, known today as the Continental Building. Courtesy of the Photo Collection – Los Angeles Public Library.