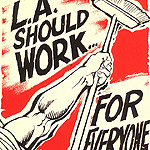 Each week, these CityDig posts share a historical image from Southern California’s rich archival collections. Now is your chance to see those historical materials in person. This Saturday, librarians, archivists, and private collectors representing more than 80 L.A. as Subject member institutions will unpack rare and unique artifacts from their collections for the 8th annual Los Angeles Archives Bazaar.

Many of the items on display reveal surprising connections within Los Angeles history. Take Ayn Rand, for instance. Before The Fountainhead and Atlas Shrugged earned her legions of followers, the Russian immigrant lived in Los Angeles and penned Hollywood scripts for Cecil B. DeMille, Universal, Paramount, and Warner Bros. This Saturday, the Irvine-based Ayn Rand Archives will be displaying memorabilia related to her early screenwriting career, like the Love Letters poster featured in the slideshow below.

Other featured materials have connections that are more obvious: As in past years, the LA84 Foundation will bring a torch—its flame safely doused—from the 1984 Summer Olympics. The Natural History Museum of Los Angeles County, meanwhile, will display the official program from a 1913 ceremony commemorating the opening of both Exposition Park and the Los Angeles Aqueduct.