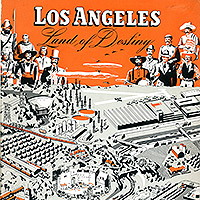 Pictorial maps are often hybrid creations combining practical cartography and an advertiser’s art. They rarely depend on geographical accuracy and sometimes veer away from actual latitude and longitude in order to make a point, making many of them products of commercial interests or the larger cause of boosterism.

Los Angeles has had many a great pictorial map dedicated to its place in the big American picture, with most portraying the place as a sort of Industrialized Eden on the West Coast. This “map” created in 1941—a very interesting year for L.A.—is about 99 percent imagination and one percent geographer’s ink on the page. I chose to delve into its history for two reasons: First, it paints a skewed but fascinating picture of the city in a tumultuous time. Second, look at the thing! It is just plain awesome.

Gazing down at an array of city charms are historical figures who helped cement our place in American history: a Californio, a Tongva Indian, a Franciscan friar, a conquistador, a frontiersman (however, coonskin caps would not have been worn around here until the 1950s), a Gold miner, a stereotypical Mexican, what appears to be a saloonkeeper, a sheriff, a Civil War vet (L.A. was mostly a confederate town) and a smiling businessman of the day.

The map was obviously created to extol the industrial strength of Los Angeles alongside the sweet Southern California lifestyle. We see electrical power surging from the newly opened Hoover Dam, oil fields providing plenty of juice to all sorts of motors, the factories of Vernon, and citrus orchards and farms ready to feed the many mouths that would flock to L.A. Such a depiction would have indicated a wealth of jobs at the deep-water harbor, in the automobile plants, in aircraft manufacturing and even in the booming moviemaking industry. What’s more, the map infers that all of these wonders were connected by railroads and traffic-free highways. (Well, it is fanciful.)

In 1941, Los Angeles became the number one defense manufacturing city in the country as the United States geared up for World War II. Douglas Aircraft alone produced 150 warplanes per month, and the shipyards down in San Pedro provided the Navy with over 400 ships. The good life on the home front is evidenced by the glamour of a blockbuster movie set, the ubiquitous mansions in the hills, and a Palm Springs resort featuring swimming pools, palm trees, and lots of cocktails (probably).

1941 was also a year when the local papers, backed by big business, tried to vilify trade unions that were flexing their muscles and threatening strikes in factories, newspapers, recording studios and even out on the Walt Disney lot (where cartoonists were asking for more dough). The Times suggested that big labor was pro-Nazi, filled with racketeering, and was sabotaging our national defense effort. They also went about accusing president Roosevelt of class warfare for his New Deal policies. At the same time, politicians were concerned with the Power Bureau (an old name for DWP) having too much power, and busied themselves passing laws to keep those fleeing the dust bowl from coming across the California border (which was eventually invalidated by the Supreme court). Now, where have I heard that before…?