Home Uncategorized CityDig: Should I Stop or Should I Go? Early Traffic Signals in... 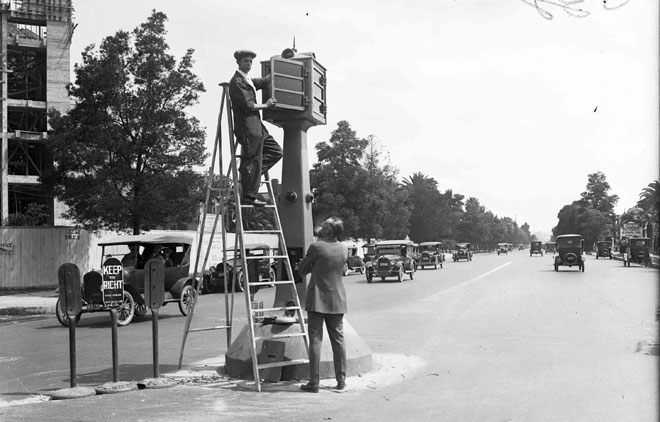 Road rage episodes and hit-and-runs appear in the news far more frequently these days than stories about manners and shared understanding among Los Angeles motorists, but until the city began experimenting with traffic-control devices, a driver at an intersection relied only on common sense and a set of complicated rules in deciding whether to proceed or wait politely. The first automated traffic signals didn’t arrive until the 1920s, as the city’s streets became increasingly congested, and police officers found themselves more and more frequently pulled from their patrols to direct traffic.

To get cars and commerce moving again through the downtown business district, Los Angeles installed its first automated traffic signals in October 1920 at five locations on Broadway. These early signals, manufactured by the Acme Traffic Signal Co., paired “Stop” and “Go” semaphore arms with small red and green lights. Bells played the role of today’s amber or yellow lights, ringing when the flags changed—a process that took five seconds. By 1923 the city had installed 31 Acme traffic control devices.

While they helped relieve traffic congestion, the semaphore signals had several drawbacks. The mechanical arms often became stuck, especially in inclement weather, confusing drivers and choking the flow of traffic. More importantly, their location at street corners made them difficult to spot, as trucks slowing to make a turn could block motorists’ view of the signals.

In response, Los Angeles experimented by placing signals in the middle of a few of its busiest intersections. Nicknamed the “American Bobby” since it stood in the same place as a London traffic control officer, the new signal stood high atop a tall stanchion. Its location in the center of the intersection may have presented a traffic hazard, but the red and green lights, which replaced the unreliable semaphore arms, were easily visible to motorists in all four directions.

In May 1924, the Automobile Club of Southern California installed one of the first American Bobby signals—pictured above in a photo from the Auto Club Archives—outside the club headquarters at Adams and Figueroa. With nearly 70,000 cars passing through each day, the intersection was then the busiest in the United States. Similar signals went up on Wilshire Boulevard at Vermont and Western.

Eventually, superior engineering solutions replaced the American Bobby and the Acme signal. The now standard tri-color light—first used in Detroit in 1920—made its Los Angeles debut in 1931, and mastarms began lofting the traffic signals high above L.A. intersections in 1946.