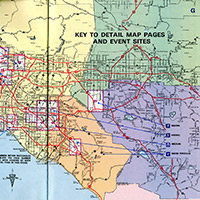 Keeping with the ‘80s theme (get your fill of the decade with our July ‘80s issue, out this week), I present this map that shows L.A. during one of the more magical times in our history. From July 28 to August 12, 1984, the city bloomed beautifully and a strange civic pride settled over the basin as Los Angeles hosted the 23rd (or XXIII, if you went to Catholic school) Summer Olympics.

In the months leading up to the event, crepe-hangers and naysayers were dumping all over the city for having the temerity to host the sure-to-be disastrous, tax-gobbling 1984 Olympics. It was a tumultuous time when such endeavors were costly and disruptive to cities foolish enough to undertake the mammoth task. The negative nabobs insisted that the traffic would paralyze L.A. and taxpayers would be handed a billion dollar tab at the end of the festivities—Montreal, after all, was still struggling to pay off their $1.5 billion debt from the 1976 games. Indeed, locals knew the Olympic stadium there as “the big owe.” Moreover, the “Eastern Bloc” boycotted the games due in part to the fact that the U.S. had boycotted the 1980 Olympics in Moscow, in protest (ironically) of the Soviet invasion of Afghanistan. That meant that chief rival USSR plus powerful East Germany and Cuba along with 11 other sympathetic countries refused to participate in the ’84 games. The equivalent would be an American League baseball season where the Red Sox would refuse to play the Yankees.

The Los Angeles organizing committee was forced to be extremely inventive when it came to planning in an effort to keep costs down; in fact, instead of building new structures, they used existing venues all over Southern California as demonstrated here. The venerable old Memorial Coliseum was spruced up and seemed perfect for the opening and closing ceremonies, bookending a very thrilling track and field competition that saw Carl Lewis grab four gold medals.

The Sports Arena was just right for boxing, the Forum was an established basketball arena, Dodger Stadium made exhibition baseball a big draw, and beautiful Santa Anita provided indelible memories in the equestrian sports. Gymnastics (with adorable Mary Lou Retton) were at UCLA, Water Polo at Pepperdine, Cycling at California State University, Dominguez Hills, and the Swimming and Diving took place at the Aquatic Center at USC. Traffic was actually lighter than normal, parking was a cinch, and we didn’t seem to miss the Russians at all.

Meanwhile, large numbers of volunteers manned and womanned the events, and the entire city was decked out in the colors of the ‘80s: magenta, purple, yellow, and teal. (Read an interview with the designer behind the scheme, Deborah Sussman, in the aforementioned July issue). Even the mascot, Sam the Eagle, seemed cool, and the theme song by John Williams (aptly titled “Olympic Fanfare and Theme”) made it onto the pop music charts alongside Duran Duran, Prince, and Ray Parker Jr.

These were also the first ever privately sponsored games, and despite cries of commercialism, it all seemed to work—thanks in great part to the direction of Peter Ueberroth, who ended up on the cover of Time magazine as Man of the Year in January 1985. When it was all said and done, Los Angeles actually made a $214 million profit, and the U.S. won an unprecedented 83 gold medals.