Home Uncategorized CityDig: Scare Yourself Silly With This Map of L.A.’s Fault Lines 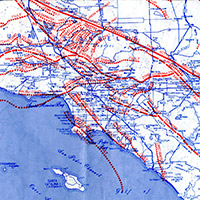 Many an earthquake myth surfaced on the entertain-news stations last weekend courtesy of the tremor Los Angeles felt on Friday night. The recent news from Chile of an 8.1 quake demonstrates how devastating these seismic cataclysms can be in populated areas.

In January, we examined the Hollywood fault and the contentious report by the California Geological Survey on “earthquake zones of required investigation” that took a scary look at old tinseltown’s unnerving place on the fault map. The map seen here is nowhere as scary as the new zone maps but may still raise the blood pressure of those living anywhere in the southland, as it graphically shows the abundance of faults in the area. The Santa Susana and Chatsworth loom over the valley; the Whittier, Santa Monica, Inglewood-Newport, and the Sierra Madre criss-cross the county; and the granddaddy of them all—the San Andreas fault—runs through 810 miles of California, forming the tectonic boundary between the Pacific and North American plates.

The futility of predicting earthquakes is represented on this map, which does not show the Northridge fault line or the Puente Hills thrust fault (which was last week’s troublemaker). Northridge was unknown until it caused the crippling 1994 shaker and Puente Hills was not discovered until 1999, well after this map was made. In other words, there may be a lot more seismic trouble brewing than we know of at this time. (Insert frowning emoji here.)

The foreboding idea of more action along the Puente Hills fault is that it travels all the way from northern Orange County and right underneath downtown L.A. along a path filled with large populations and old concrete buildings. A large quake along this fault would be far more calamitous than the San Andreas Fault, even with its dangerous reputation.

While it may be worrisome, it is not quite as bad as the television talkers would have you believe: There are 500,000 earthquakes a year on our planet, and despite the hoax email circulating this week from the faux USGS trumpeting a 7.4 earthquake (someone’s bad idea of an April Fool’s joke), there is no way to “predict” such events. Moreover, there is no such thing as “earthquake weather” or savant dogs and cats, no evidence to the fact that L.A. would fall in the ocean after the Big One, or that March is earthquake month, or that hot, dry conditions lead to tremblers. The much more frightening fact for Dodger fans is that San Francisco and Los Angeles move toward one another due to plate movement at a rate of two inches per year.