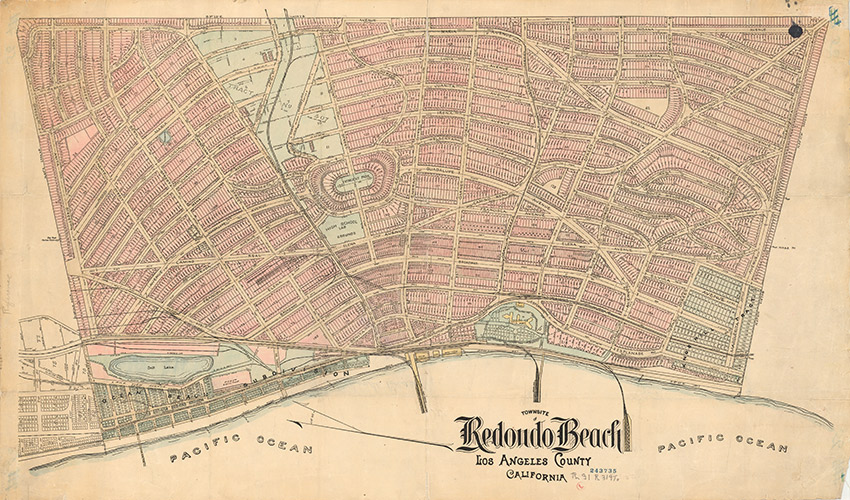 Although the South Bay today seems like a world unto itself, it once was very much a part of the city of Los Angeles. This map appears to have been produced in the early 1900s, but it is not dated nor is it attributed to any cartographers or producers; That being said, the presence of high school grounds (though there is no building to signify the school, which opened in 1905), the Casino and Pavilion, and the thoroughly subdivided town indicate that the map was made in the 20th century.

The town seen on this map (view the image larger) was founded in 1887 when the Dominguez family sold off 434 acres of beachfront property from the former Spanish land grant Rancho San Pedro for $12,000. The land went to a group of developers whereupon it was sold and re-sold several more times, finally landing in the hands of Captain J.C. Ainsworth and R.R. Thompson. Ainsworth and Thompson managed a fleet of steamers, and after seeking port in Redondo, they used their eye for industry to build the area up.

1887 also happened to be the year when the Santa Fe and Southern Pacific railroads waged a rate war, thus drawing thousands of newbies out to Los Angeles and setting off a population and real estate boom. Redondo was primed for development as a double-threat: it held the possibility of being a resort and as well as a deep-water port. Speculators bought up the land in hopes it could be both a place that would open Los Angeles up to shipping riches and act as a sun-soaked paradise known as “the gem of the continent.”

A great, 225-room hotel was built in 1889 (the Miramar, then the Redondo Hotel), and plans for railroad lines connecting Redondo to close-by Los Angeles added to increased interest. In 1892, Redondo Beach was incorporated with a great salt water bathing pool, bath houses, a couple of reservoirs, an old fashioned plaza, and an intricate street layout with the east/west roads being named after precious stones (beryl, amethyst, agate, diamond etc.) and the north/south roads with girl’s names mostly drawn from the Dominguez family tree (Benita, Elena, Francisca, Gertruda, Irena, Lucia, etc).

The map also shows the amazing Salt Lake, a 200’ by 600’ spring-fed body of salt water just 200 yards from the ocean. “La Esplanada” was a street along the shore set aside for invigorated strolling. At that time, the port enjoyed great success, especially in the shipping of lumber for use in the big city.

By the time this map was created, the old dream of the Port of Redondo had faded. Three great wharves were built in the process, but after some success they were destroyed by storms and neglect. By 1916, all of the wharves were out of commission, and the change to steam shipping along with the opening of the Panama Canal ensured that Redondo would have a precious view of the Pacific instead of docks.

The presence of a submarine canyon offshore at first allowed the windjammer ships to come within a couple hundred yards of shore but later made it difficult to build the breakwaters necessary to make it the primary hub of the shipping industry. Despite a terrible decision to make Redondo Beach a dry city in 1903, the area became a destination for weekend pleasure seekers from L.A., and by 1910 the beaches were alive with Angelenos. Pacific Electric’s Red Cars shuttled folks out to the sweet spot from downtown L.A., and eventually the little lots in Redondo Beach would become ten times more expensive than the original purchase price for the entire town—those who may be house hunting in the South Bay at present will likely swoon at the $350 to $750 pricetag of land parcels in early auctions of Ocean Beach.