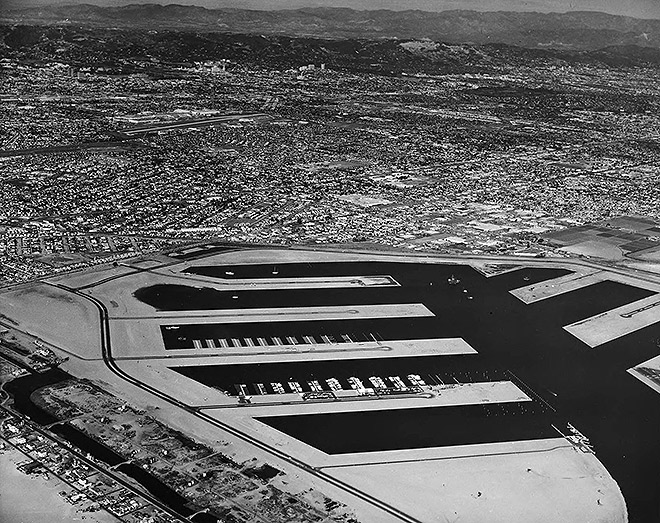 Viewed from the air in 1962, Marina Del Rey looks sinister and alien, as if extra-terrestrials had established a beachhead on the Los Angeles shore. Eight berthing basins stretch out from the main channel at unnatural angles, surrounded by freshly graded, evenly colored dirt.

As otherworldly as this landscape appears, it was in fact the work of humans—hundreds of them operating the heavy machinery that transformed tidal marshlands into an 824-acre yacht harbor with slips for 6,200 boats. Dredgers scooped nearly 15 million cubic yards of sediment to create the channel and basins, then removed a so-called “land plug” to marry the marina’s waters with the ocean’s. Elsewhere, workers drove wooden pilings 35 feet into the earth and encased them in concrete to form the marina’s bulkheads. They relocated sewer lines that had crisscrossed the site and dropped boulders into the sea to create two protective jetties.

The first boats arrived in August 1962, around the time of this photograph, but major work continued through the harbor’s grand opening in 1965. All told, the county-led project took more than seven years and cost $32 million.