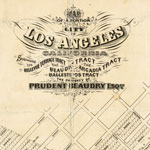 The cartographic history of early Los Angeles is a series of subdivisions, and this map exemplifies the breaking up and selling of land parcels within the original pueblo area of the city in California’s early years of statehood. Many early maps acted as real estate advertisements and were sometimes graphically beautiful, like this one produced by the famed Britton and Rey lithographers from San Francisco. Five fine tracts of land are featured; all belong to Prudent Beaudry, a Canadian immigrant who had done very well in retail and real estate. You could say Beaudry was an early “developer” who bought land cheap then improved it and sold it at a handsome profit without apology. A man of many ideas and strong opinions, he was elected to the Common Council and then Mayor in 1874 but was also involved in water companies, streetcars, vineyards, and even orange growing for a time.

The map is simple but shows the early street names clearly from Plaza Way over to the sticks of 7th Street. Included are also a few landmarks: St. Vincents College (later to become Loyola University), the Gas Works, City Hall, the court house and the lush gardens of Bellevue Terrace, where Central Library stands today. Of note is the train depot at Alameda and Commercial used by the Los Angeles and San Pedro Railroad, the very first railroad line in Los Angeles. Before the transcontinental rail connections of 1876 (Southern Pacific) and 1885 (Santa Fe), the LA & SP Railroad, built by Phineas Banning and John G. Downey, connected the city to the harbor 21 miles south. Also on this map is the true meridian next to magnetic north with the variance of 14/30 E. The detail goes over my liberal arts-educated head but will be of some interest to mathematicians and engineers.

Above: Map of a portion of the City of Los Angeles, California showing Bellevue Terrace tract, the Beaudry Tract, the Arcadia Tract, and the Ballesteros Tract by Litho Britton and Rey San Francisco, 1868