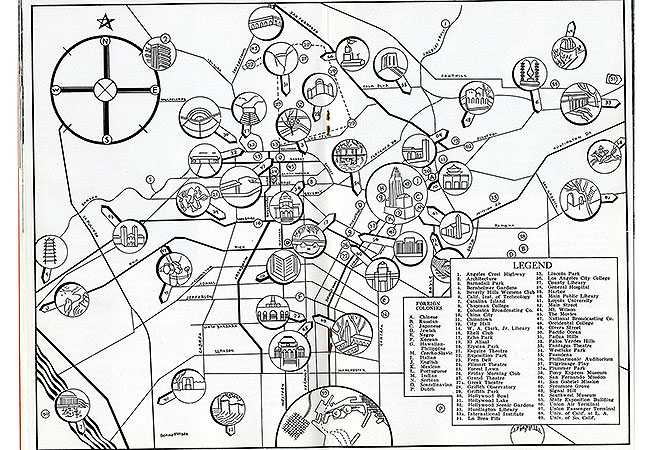 This rather simple tourist map of the city has a couple of levels. Intended as a means by which to promote the “civilized” side of Los Angeles, it also offers a glimpse into the not-so-proud history of discrimination and disenfranchisement in these parts.

On the one happy level, we see the charms of the great outdoors of Southern California including Griffith, Elysian and Echo Parks along with green spaces like Fern Dell, the Hollywood Scenic Gardens, the Palos Verdes hills, Sycamore Grove, and the mighty Pacific Ocean offering glorious, open, natural space. The map, which comes from the book The Cultural Assets of Los Angeles by Dudley C. Gordon, also reminds us that the pursuits of the mind are, in large part, major components of our social fabric. The opening sentence of Gordon’s tome trumpets, “Los Angeles reaches her intellectual majority.” Higher education is indeed represented here at UCLA, USC, Loyola University, Occidental, Chapman College, and Cal-Tech. Musical institutions dot the map like notes on a scale: the Hollywood Bowl, the Greek Theater, and the Philharmonic Auditorium. Both sides of the film industry are represented, from movie palaces to movie production, lumped together simply as “The Movies” (#45 on the legend).

The cultural life of the City of Angels includes the Huntington Library, the William Andrews Clark library, the Southwest Museum, the “County Library” (then at 3rd and Broadway), and the misidentified Main Public Library (actually Central Library). There are some familiar old tourist hangouts: the Griffith Observatory, Olvera Street, and the San Gabriel and San Fernando Missions alongside attractions youngsters might not be familiar with (like Lincoln Park—where the Zoo had stood just a few years earlier—and “the Tar Pits,” which would yield prehistoric mammal bones during excavations in the 1940s). Nods to the modern infrastructure of Los Angeles include the new Union Passenger Station for train travel, the San Pedro harbor (where luxury liners waited), and the Union Air Terminal, where a Douglas DC-3 might whisk you off for that short 11-and-a-half hour flight to New York.

Remembering that this map was put out in 1940—a time when locals refused to accept “Okies” fleeing the disastrous Dust Bowl, the Japanese-American community was under close scrutiny, and racial covenants were attached to real estate deeds all over the county—there is a less savory layer to the map. In a smaller legend is the listing of “foreign colonies,” which might make sense if these were the places visiting tourists gravitated toward. Yet, “Negro” is considered a foreign colony (letter E on the legend), as are those communities containing Chinese, Russian, Jewish, Korean, Filipino, Italian, Mexican, Indian, Serb, Czechoslovakian, Dutch, and Scandinavian immigrants. Even the English are set apart.

African-Americans were somewhat limited to the neighborhoods along Central Avenue, a street that eventually became famous for an extremely lively social scene. Mexicans are seen around the downtown area (near the Chinese of Chinatown and China City), while the Japanese, who would soon be relocated and their property seized due to president Roosevelt’s Executive Order 9066, are represented in Little Tokyo. Russians and Jews are in Boyle Heights; Portuguese and Japanese share Terminal Island by the harbor; Scandinavians abound in what could be Echo Park; Italians are congregated along North Broadway; and Koreans lived around Vermont way before it was called Koreatown.

This “foreign colony” concept goes back to the old racist themes of the Americanization of Los Angeles and the rejection of its multi-cultural founding. While Gordon’s book discusses the colonies politely, this was a time in the city when racist cartoons appeared in the newspapers on a regular basis and some public swimming pools only allowed minorities to swim on certain days (after which the pools were drained). So much for the intellectual majority.