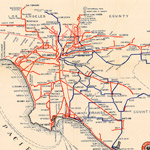 By the 1930s, the fine old streetcars known as the “Big Red Cars” of the Pacific Electric Railway were beginning to share the roads with automobiles and “Motor Transit Stages” that offered a smooth alternative to rail travel. Pacific Electric Railway (PE) had acquired the El Dorado System’s 33 passenger buses in April of 1930, therefore expanding public transportation choices on both rubber and rail.  PE was still responsible for exposing common people to the glories of “Southern California’s Beach and Mountain Resorts and all principal cities…anywhere…anytime…at low cost.”

In the early 1900s, American railroad magnate Henry E. Huntington purchased a smaller rail line between Pasadena and Los Angeles, which acted as the foundation of the Pacific Electric railway. In that first decade, six other lines were completed that transported Angelenos to Monrovia, Santa Ana, and everywhere in between. In 1911, Huntington was bought out by Southern Pacific in an event known as “The Great Merger,” which added even more lines to the already sprawling system. By 1914, the Pacific Electric network was the finest electric interurban public transportation system on the planet. That being said, the streetcars began to slide as early as the mid-1920s, and many of the lines were converted to bus routes as seen on this view.

Nevertheless, this cheery map still beckons the common man or woman to come out on the rails and explore the glories of SoCal. In cajoling day-trippers, the Pacific Electric provides a cartographic picture of all the dazzling destinations one could travel to in a day: Folks could ascend to the Mt. Lowe Tavern at 4,429 feet elevation, take a bus to beautiful Sunland and Tujunga, streetcar out to the Vineyard station and grab the connector to the new UCLA, or take the “El Dorado System” down to the Pike in Long Beach for some roller coaster fun.

Excursion packages were available to wintry havens like Lake Arrowhead for something like $6 round-trip, and in the summertime, passengers could experience “dawn in the Big Pines” of Big Bear Lake for $7.25. As far as monikers go, it is hard to beat the streetcar maps for unique handles like Otterbein, Stolco, Loftus, Stern, Eden, Bethel, Galina, Rivas and Wingfoot.