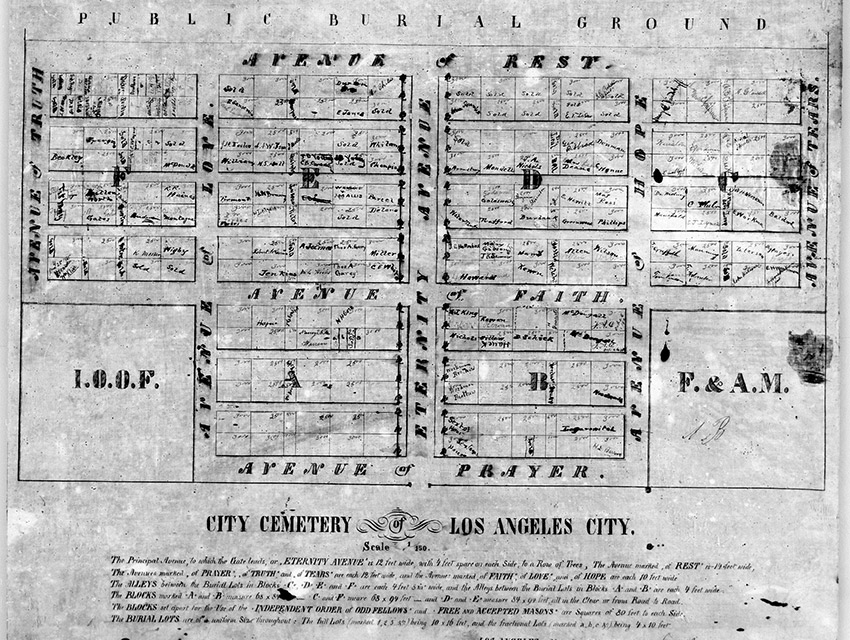 The City Cemetery of Los Angeles, seen here on All Souls Day in 1863, was the first true public cemetery where just about anyone could plant a loved one. In its early days, the necropolis had two public sections where anyone could be buried, so the place became a sort of boot hill for the cowboys and local miners who could not afford a funeral in a mid-19th century (and rather lawless) L.A. That said, many prominent Angelenos were interred at the City Cemetery, as shown by names like Glassell, Hollenbeck, Workman, Rowan, Sanservain, and Childs, all highly respected pioneers. Interestingly, these burial grounds were free from segregation—all races were welcome after death.

This map shows the cemetery at a time when it was sexton-less, neglected to the point that it was described as a place of “lonely, dreary desolation.” (That’s not to say that well-kept cemeteries are particularly merry, but you get the idea.) For years the city council blew hot air about putting up a fence and maintaining the place out of respect to those slumbering in the plots seen here. The detailed rendering seems to reflect an effort to sell tracts and raise money for upkeep—for thirteen years prior, the cost of burials was nil, the dead a crew of lifeless squatters.

The main road up the hill was appropriately called Eternity Street, with offshoot roads called Prayer, Truth and Tears and side paths called Faith, Love, and Hope. Private areas existed for the Independent Order of Odd Fellows and the Free and Accepted Masons, organizations that were in charge of services for their own fallen. It took another four years until then-mayor Damien Marchessault appointed a committee to organize efforts to improve the cemetery; Finally, in 1871, Frank Hosmer was named the first caretaker for the typical civil servant wage of $100 a year. As it turned out, Hosmer was asleep at the switch—after 845 people were put into plats and very little upkeep was provided, the place slowly became untenable for the dead, and further burials were forbidden in 1879.

With all of its troubles, the City Cemetery’s days of eternal rest were numbered even before the new process of cremation reduced the need for graves in the growing city. Moreover, the great land booms of the 1880s made the real estate up on Fort Moore Hill desirable, not dreary. Add to that the establishment of the new and expansive Evergreen and Rosedale cemeteries, both of which created funereal alternatives and made the land of the City Cemetery more valuable to the living than the dead.

Eventually, the old burial grounds were encroached upon by buildings of the nearby Los Angeles High School and later as part of the grounds of the Los Angeles Board of Education. Some bodies were exhumed and moved to Rosedale, but others were forever lost when the ground over their graves was covered in asphalt, making a sad black headstone otherwise known as a parking lot. The ghosts of these restless souls may very well continue to haunt the traffic jams up around the Hollywood freeway.