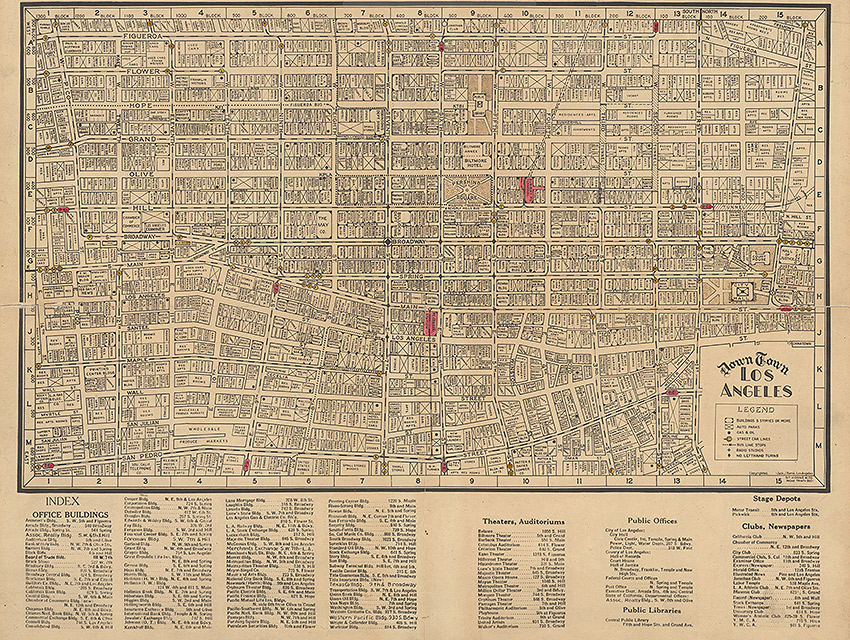 In my line of work, the query comes up frequently: “How do maps answer questions?” In this case, the map brings up questions in its description of life in Los Angeles just eighty some years ago (click here to see it larger). This is one of the early maps of the great cartographer Jack Renie that evokes an era of mystery and romance in L.A.—it depicts a Los Angeles that had six (six!) newspapers and 22 theaters along with a functioning Stock Exchange that was still reeling from the events of 1929. And while this little gem focuses on downtown, it also says a lot about transportation and commerce in a city that had by this time surpassed one million residents. Not only does Renie give a building-by-building layout of the densely populated city, but he also provides an economical listing of buildings, theaters, hotels, public offices and clubs, and newspapers along the lower margin. The fairly recent public library is there along with the quaint sounding “Stage Depots,” known now as bus stations. Public transportation was under strain and private automobile traffic was also bidding for space on the old streets of the new metropolis. By the time this map was made, most likely in the early 1930s, we had streetcars, autos, buses and taxis attempting to move throughout the intimidating maze of downtown in some kind of harmony (hah!) It’s not hard to spot the one-way streets featuring that dreaded diamond symbol meaning “NO LEFT HAND TURN!”

All the needed landmarks of urban travelers are also in evidence: gas stations, auto parks, streetcar and bus stops along with the decade-old novelty of radio stations. Bunker Hill was still intact but fading, and the tall, architectural pride of Los Angeles, the City Hall at 1st and Main, lorded over the civic center with the Hall of Justice, the Federal Building the Hall of Records, the Court House and the old Post Office also visible.

My personal favorite, however, is the Pickwick Stage Depot at 6th and Los Angeles, right across from the Pacific Electric Central Station. That depot would be the destination for Pickwick Motor Coaches that are a far cry from today’s version (you may know them as Greyhound buses). Our Pickwicks were the charming idea of the California Transit Company of Los Angeles and filled a niche transportation need that fell somewhere between trains and trolleys. They were small buses and rather deluxe in their many amenities. Dating back to the late ‘20s they contained high backed chairs with reclining positions, card tables, observation deck seats, lavatories, and even a men’s smoking compartment. The early Pickwicks accommodated 20 people, with 12 spots for ladies and eight for the gents. The delightful-sounding (and looking) Pickwick Nite Coaches had two passenger compartments, 86 inches of headroom, hot meals, and a steward on board for each trip.

Pickwick offered overnight runs up the coast from San Diego to L.A. to San Francisco, complete with porters and a dining compartment manned by a professional chef. One can imagine a traveler strumming a ukulele and crooning, “It’s Only a Paper Moon” as the Nite Coach cruised along the Pacific shore. These motor coaches made cross-country journeys heading east, stopping in Denver or El Paso or Salt Lake and continuing to Indianapolis, St. Louis, and then finally to Philadelphia. The magazine campaigns for Pickwick were a dreamy tableaux of evocative advertising art that portrayed a way of travel that was both exotic and very California dreamy.