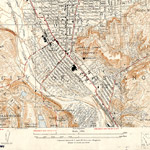 Northeast L.A. has been in the limelight of late, an area which seems to be the desired destination of hipsters and house flippers from all over the southland. But once upon a time, those hills near the Los Angeles River were artsy and bucolic, which earned them the nickname “the lungs of Los Angeles” (because of open land and old growth vegetation).

Though the names on this 1928 map—a portion of the USGS topographic quadrangle—have fallen from our lexicon, it still portrays certain geographic stories that have been progressing since the 19th century. Originally, a portion of the area was part of several large colonial Spanish land grants, Rancho San Rafael and Rancho San Pascual, which  were subdivided over and over in ensuing years. Much of the approximately 17-square-miles were eventually annexed by the city of Los Angeles, starting with the big chunk of Highland Park in 1898.

While the Northeast may have seemed remote in the early days of settlement, it was soon connected by street rail, as implied here by Pacific Electric tracks and the old roads San Fernando Boulevard, Glendale Boulevard, and Glassell Avenue (which has since turned into Eagle Rock Boulevard). A depiction of electric power surging through the Edison Power Line created by Southern California Edison is also pictured on the map, along with beautiful Mt. Washington, the 1909 creation of Robert Marsh and boosted by his Mt. Washington railway, which cropped up around the same time as the electric connections.

Eagle Rock morphed from farming community to city in 1911 and officially became a part of Los Angeles in 1923. Glassell Park was developed as a suburban community from 1912 to 1916. The major landmarks here are Occidental College, which moved to “North Highland Park” from Boyle Heights in 1920, and the once great Southwest Museum, which was founded by Charles Fletcher Lummis. Finally, there is Forest Lawn Cemetery, which became a memorial park in 1917 and is the final resting place for many local celebrities including Walt Disney, Spencer Tracy, Humphrey Bogart, Clark Gable, Jimmy Stewart, and, most recently, Michael Jackson.

It’s hard to ignore some interesting places just across the river on this map: You’ll notice “Mixville,” where silent film star Tom Mix created a 12-acre set that included a meticulously replicated old West town. The literary sounding “Ivanhoe” was one of over one hundred cozy little communities plotted in the boom of the 1880s. There is also the romantic sounding “Elysian Garden” and “Silver Lake Heights” (just 12 minutes from downtown!) that today gets realtors salivating. Peeking out from the lower left corner of the map are the twin draws of the Silver Lake Reservoir and a thriving Hollywood with its Vitagraph Studio, which had already been swallowed up by Warner Brothers (later Prospect Studios) by the time this map hit stores.