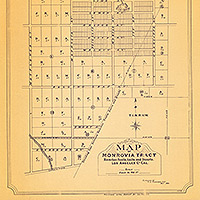 In the 1880s, real estate investors focused their gazes (and bankrolls) on the suburbs of L.A., where they knew land would be quick to sell after the Santa Fe and Southern Pacific railroads began servicing the sticks. This broadside/tract map shows the planned community of Monrovia, with the 15-parcel “Monrovia tract” encircling twenty-four 50’x160’ lots “clear and ready for the plow.” The sixty acres sold like hot cakes to speculators and hopeful settlers in this picturesque spot at the foot of the San Gabriel mountains.

The area had originally been part of the San Gabriel Mission lands, then part of two Mexican land grants—Rancho Santa Anita and Rancho Azusa de Duarte—before being cut into pieces and sold off to buyers looking to profit from the housing needs of the thousands of folks coming West. None other than Elias J. “Lucky” Baldwin (Of Baldwin Hills, Bladwin Park, Baldwin Lake, and Baldwin Avenue fame) bought 8,000 San Gabriel valley acres in 1875, about the time real estate became a seller’s market in the southland. Baldwin joined with former Los Angeles mayor Edward F. Spence, Judge John D. Bicknell, railroad builder James F. Crank, rancher and former councilman William N. Monroe to form the Monrovia Land and Water Company just in time to reap the harvest of the “great California land boom.” At the end of 1886, the population of Monrovia was 300 and by the end of 1887 nearly 2,000.

The Santa Fe Railroad ran directly through new Monrovia, and so the land increased in value to the point where buyers who only needed to put ten percent down turned their purchases around and sold them the next day for large profits. Kids stood in the long lines to secure lots and sold their spots to hopefuls who came from other states and sometimes even foreign countries. There were some restraints in place since Monrovia was a “dry city,” and buyers had to promise to build a home of at least $2,000 in value but were given free water piped into their properties.

Alas, some L.A. stories are bound to repeat: Heavy rains, flooding and bad press back east caused the bubble of the 1887 to burst just as the one of the 2007 did, and many early Monrovians were left with debts they could not pay off.

In March of 1903, the Pacific Electric Monrovia-Glendora line connected the city to Los Angeles and made it an official bedroom community. A great number of the original homes built in the time of this map have been restored and give the town great character (and some living history).  Many of the streets on this map exist today, albeit with changed names: Originally, the North-South streets were named after flowers (except Myrtle, which was named after William Monroe’s daughter) and the East-West after fruit and nut trees. That being said, White Oak became Foothill, Orange changed to Colorado, Charlotte is now Canyon and the county road became Duarte road.