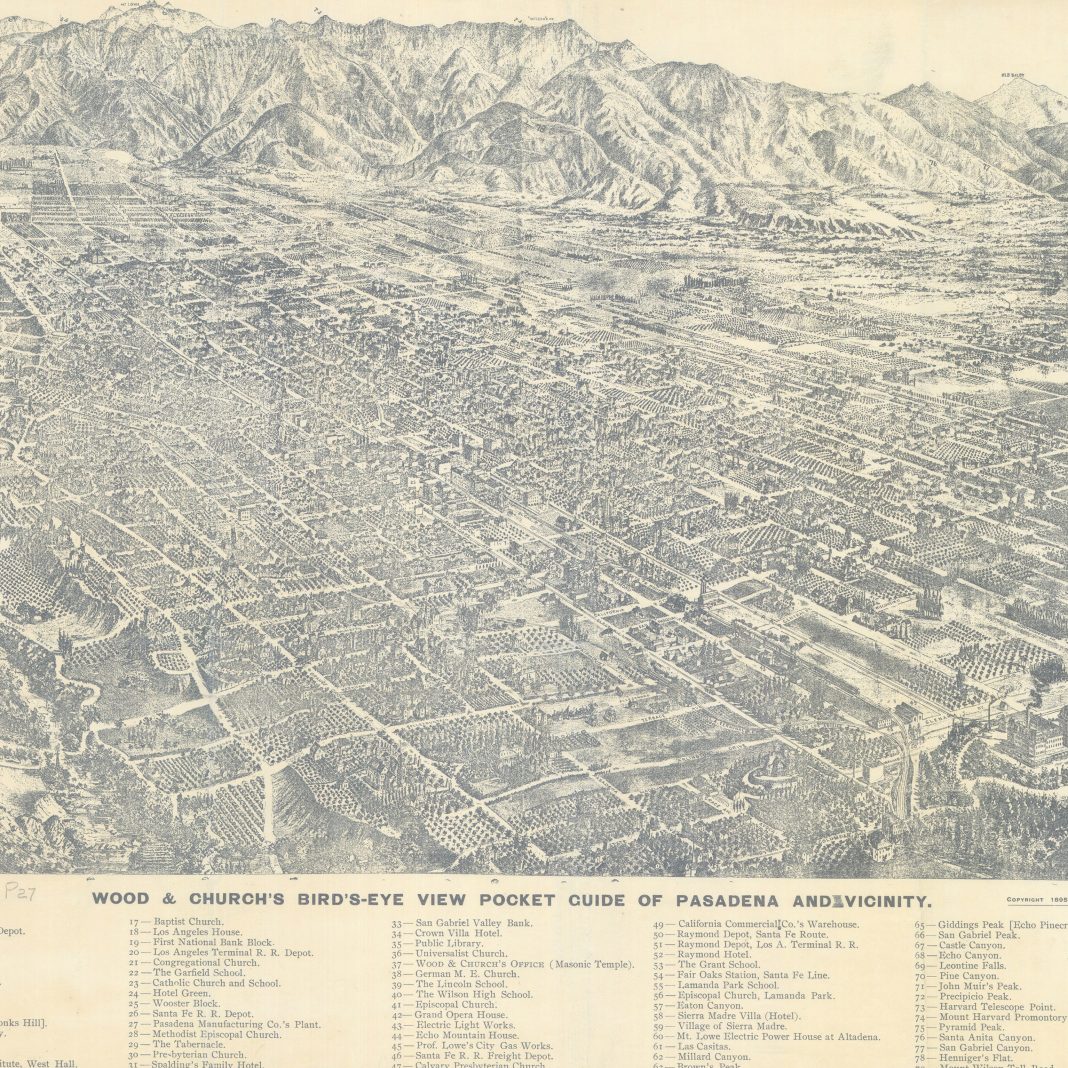 Pasadena had only been an incorporated city for nine years when this Wood & Church map was created to entice visitors to the “Crown City,” which lay picturesquely at the foot of the San Gabriel Mountains in a verdant valley. Another come to Pasadena! idea was the Tournament of Roses, conceived at the urging of founder Professor Charles F. Holder at a meeting of the distinguished Valley Hunt Club (which created a beautiful floral pageant to lure East Coasters and Midwesterners to join their friends on the left coast). The idea took shape in 1890, and by 1891 the first marching band (from Monrovia) and flower-decorated buggies moved slowly down Colorado boulevard from Marengo and ended at Sportsman’s Park on New Year’s day (but never on Sunday). The Los Angeles Times referred to the inaugural event as “Today’s Rodeo,” which featured a tug-of-war, steeple chasing, polo and even jousting. Later ostrich racing, bronco busting and a race between an elephant and a camel were added, along with human races and feats of strength.

The parade drew a smallish crowd of 8,000 in its first year, but it became so popular as time went on that grandstands were erected in 1894. The festival was such an enormous hit that by 1895, it outgrew the capacity of the volunteers of the Valley Hunt Club, and the Tournament of Roses Association was created from the ranks of those pioneers.

By 1898, the gloriously sunny Rose Parade was covered by national newspapers, and in 1902 the first Rose Bowl football game was played—ironically)—by Stanford and a team from Michigan (the University of Michigan Wolverines, not this year’s Michigan State Spartans).

Wood and Church expertly show every building in the city along with a thorough index at the bottom denoting Pasadena landmarks and resort-worthy attractions. The comparatively short parade route of 1895 would be visible on this map from that familiar corner of Orange Grove and Colorado heading east, while the few floats with the big horses pulling them along crawled by. Certainly not the five-and-a-half mile tour with almost fifty floats that today’s internationally-viewed parade takes around the streets of Pasadena.

From 19th century beginnings, when old Pasadena money was young, locals have lined Colorado Blvd. and savored this amazing spectacle. It is a revered tradition in Los Angeles area homes to get up (maybe a little hung-over) in time to turn on the TV, catch the first band, and watch two full hours of the Rose Parade while feeling pretty good about our “harsh” winters.