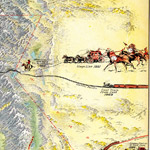 Another of the excellent pictorial maps produced in the name of boosting Los Angeles is the one pictured above, commissioned by architect Frank Meline for his siren song of a book called Los Angeles: Metropolis of the West. This map is one of four drawn for the tome by the great pictorial cartographer Gerald A. Eddy, who is most famous for his beautiful series of maps of the Ranchos of Los Angeles County done for the Title Insurance Company.

Eddy does not clutter up the landscape of this “vista of the past;” rather, he depicts several historical events that were essential in making Los Angeles the nation’s 5th most populated city at that time (the first West Coast town to reach the top five). While the map shows the entire state, Eddy’s focus is on the southern part, with nods to the first voyages of exploration along the coastline: Cabrillo (1542), Drake (1579), and the supply ship that equipped the Portola expedition that lead to the founding of the San Gabriel Mission in 1771, the establishment of the El Camino Real, and eventually the founding of Los Angeles in 1781.

“The Battle of Los Angeles” is prominently displayed, portrayed as the “final surrender of Los Angeles to the United States…,” where outnumbered Californio forces under Andres Pico surrendered to the American army of over a thousand men commanded by General Stephen W. Kearney and Commodore Robert Stockton. The ensuing “Treaty of Cahuenga” (January 13, 1847) ended the Mexican War in California and marked the final land battles in the state.

Many of the other notable events involve our transportation history: the first Butterfield Stage Coach route in 1858, the Pony Express in 1860, the first Railroad in Los Angeles County (San Pedro Railroad) created by Phineas Banning in 1869, the first rail connection from the north, the Southern Pacific in 1876, and the “first Southern Pacific Train from the East” via Yuma in 1881 alongside the “first Santa Fe train from the East to Los Angeles in 1887.” The map also marks the spots where Edward Doheny discovered oil in 1892, the joining of the harbor at San Pedro to the city of Los Angeles in 1910, the flow of sweet water from the Owens Valley through our old friend the L.A. Aqueduct in 1913, and the first ships arriving from the newly opened Panama Canal in 1914. Everything about the map says let the money begin to flow—just in time for the great crash of 1929.