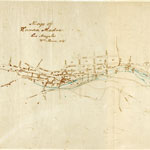 This manuscript map traces the path of the essential lifeline of early Los Angeles: the Zanja Madre, or Mother Ditch. From the earliest days of the pueblo, the water from the Los Angeles River was the most precious commodity in the community and the Zanja system was a method of delivering water to citizens for drinking, washing, cooking and irrigation of crops. As the pueblo grew into the mid nineteenth century, city water was so dear that a bucket might cost the astronomical sum of 50 cents.  The Zanja Madre is shown here from the river at the right edge of the map, running along the bluffs in the proximity of current day North Broadway, completely open to the elements. A few years after this rendering, a brick tunnel enclosed the Zanja Madre in an attempt by the Common Council and the Los Angeles City Water Company to preserve the precious water flowing down from the river.  The map includes the Campo Santo cemetery (the second one) at the end of Eternity Street, the water wheel that propelled the flow toward the pueblo, and the homes of pioneers like Jose Sepulveda, Abel Stearns, and Bernardo Wilson. William Moore, the rendering’s rather robust and tireless cartographer, was county surveyor for two separate terms and a man with such drive that he once tired of waiting for a ship from San Francisco and walked to Los Angeles. Because he was bi-lingual and reportedly quite charming he was involved in many important projects in the days after California gained statehood, including the planning of reservoirs, a sewer system, creation o f sidewalks, the Farmers and Merchants Bank, and even orange growing for a time.