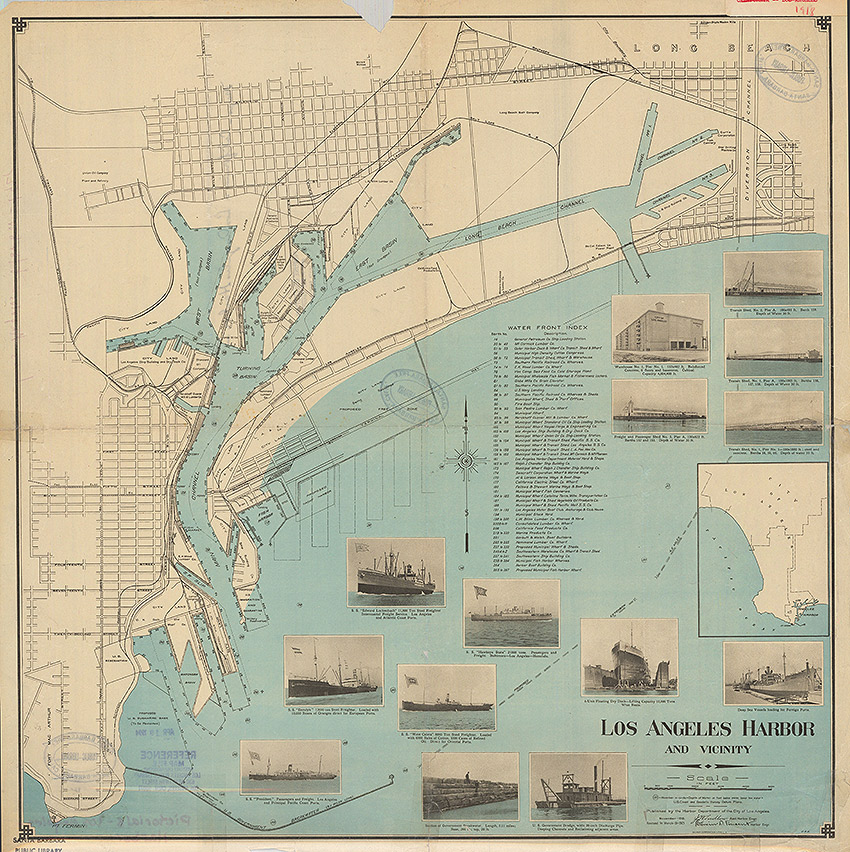 Los Angeles Harbor and Vicinity, Harbor Department of the City of Los Angeles, 1921

This cartogram, an interesting hybrid of government map and shipping-booster influences, takes a look at the Los Angeles Harbor at a time when it was poised to surpass San Francisco and become the busiest seaport on the Pacific coast.

It has been a long, strange trip for the waters off San Pedro and Wilmington, once described as “shallow mud flats” by early explorers looking to drop anchor in a deep-water port. The hope that San Pedro Bay would be such a harbor goes all the way back to the first Spanish voyages in 1542, when Juan Rodriguez Cabrillo sailed by and noticed the smoke from the campfires of the local Tongva Indians drifting out from the shoreline. By the time of the Mission period, San Pedro had been established as a trading post solely for Spanish goods. But when the Mexican government took over in 1822, restrictions were lifted and trade flourished. Phineas Banning, known as the “Father of the Harbor,” saw an opportunity and dredged the channel to 10 feet, started the first breakwater projects, and connected the area to a burgeoning Los Angeles by stage and rail (15 stage coaches and the Los Angeles and San Pedro railway, to be exact) by 1869. In a harbor competition between Santa Monica, Redondo, and San Pedro/ Wilmington, the third option won out, thus connecting L.A. to the rest of the world’s commerce. A Board of Harbor Commissioners was put in place, and by 1909 the two cities of San Pedro and Wilmington were annexed to the city of Los Angeles, with the harbor becoming a major conduit of industry in the city. The completion of the Panama Canal in 1914 made the new Los Angeles Harbor the logical choice for an East-West commerce shipping point.

Not only does this map show the natural layout of the docks, but it’s also peppered with photographs that exemplify the types of enterprise taking place in the water and on the rapidly changing land. Moreover, the Water Front Index provides a detailed list of the tenants of the many operations taking place in the harbor, including heavy hitters like the Southern Pacific Railroad wharf, Standard Oil, Los Angeles Shipbuilding (Dry Docks), Union Oil, and Southern California Edison’s Steam Power Plant.

The dredging and widening of the main channel (which began in 1912) along with a breakwater project that started at the turn of the century (seen in illustrations) allowed the port to service much larger vessels and provided room for industries from canneries to lumber yards to oil refineries to shipbuilding. Ocean liners for passages to foreign lands and 11,000- and 12,000-ton steel freighters are shown in tandem in the water.

On a social history note, much of what would become Terminal Island is identified here as “city land,” but “Fish Harbor” and nearby canneries were worked by Japanese immigrants some 3,000 strong. They turned the area into a traditional fishing village known as a Furusato, which thrived until internment stripped them of their rights and property. When these hard-working citizens returned from camps at the end of World War II, they found their boats, neighborhoods, and way of life gone for good.