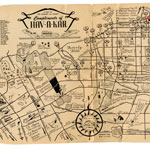 This cute little fold-up map was handed out at the office of Hav.A.Kar Automobile Rentals at 8th Street and Grand Avenue downtown during the post-war explosion of tourist activity in Los Angeles.

An unknown artist embellished the map with concise but clever depictions of local attractions. It usefully denotes locations of hotels including the classics: the Alexandria, the Ambassador, the Beverly Hills Hotel, the Biltmore, the Bel-Air, the Garden of Allah, and even the Mayflower complete with its “Jesus Saves” sign atop. Cocktail glass icons mark legendary restaurants, some of which have even survived until now. Barney’s Beanery, Lawry’s, and Musso and Frank stand alongside Ciros, Chasen’s, Mike Lyman’s, the Tail o’ the Cock, Perino’s, Bit of Sweden, and four of the Brown Derbys.

Also on the map: public and private golf courses (including those at the Wilshire, Bel Air and Los Angeles  country clubs and Rancho and Grffith Park), the Olympic Auditorium (with a pug getting a punch in the gut), Rancho Park tennis courts, the Pan Pacific Auditorium, where basketball was played, the “Hollywood Ball Park” (Gilmore Field) and even Silver Lake, where an angler appears to be pulling a fat bass out of the water! Of course there are the glamorous movie studios in Hollywood, Burbank and Culver City with quaint names, too: RKO, Chaplin, Hal Roach, MGM, Paramount, and Eagle Lion.