Home Uncategorized CityDig: Looking Back at the Lookout Mountain Inn 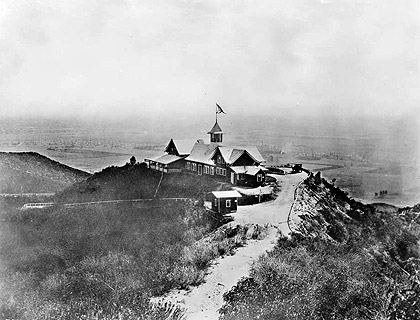 As its name suggests, Lookout Mountain was, like the Griffith Observatory or the Getty Center, a prime location from which to gaze down on Los Angeles and make a little sense of this famously incomprehensible city. Before roads reached the summit, hikers scaled Lookout Mountain, a 1,500-foot promontory rising above West Hollywood just west of Laurel Canyon, on foot to inhale its fresh mountain air and commanding views.

Eventually, a growing streetcar network and the advent of the automobile—not to mention an experimental trackless trolley line in Laurel Canyon—made the peak accessible to the less adventurous. It also made the land irresistible to subdividers. In 1908, a syndicate of developers bought a 280-acre tract encompassing Lookout Mountain and sliced the land into 700 housing lots, offering them for $250 each.

But the developers reserved the best vantage point for a grand hotel that would advertise the subdivision’s charms. The 24-room Lookout Mountain Inn opened in 1910, and its design took full advantage of the ridge-top location. Wide verandas on three sides of the main structure offered 270-degree views of the lowlands below and the ocean beyond. Guests, who paid $15 per week for room and board, could savor their chicken dinners while the city lights of Hollywood and downtown Los Angeles twinkled in the distance.

The Lookout Mountain Inn met a fiery end on October 26, 1918, after only eight years of business. A brush fire—reportedly started by a group of boys cooking sausages in the foothills—raced up the canyons and reduced the wooden structure to charcoal. It was never rebuilt. Today, a six-bedroom, 9,300-square-foot house occupies the site, its once-famous views hidden behind security gates and privacy walls.