Home L.A. History CityDig: Look Back at the First 100 Years of L.A. 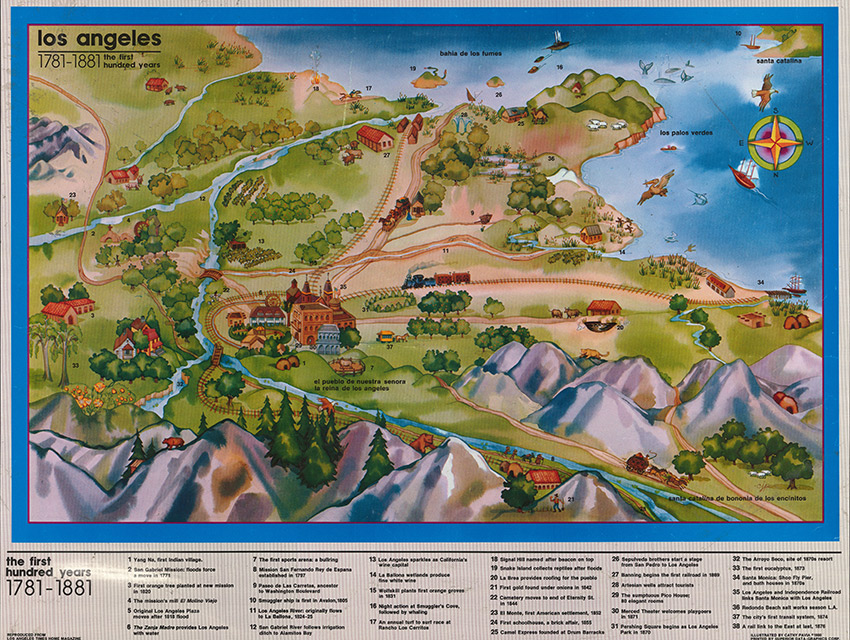 In 1981, the year of the Bicentennial of Los Angeles (or Buy-centennial, as local wags called it), there was much ado about the anniversary of the founding of the city. The hoo-rah was an attempt to awaken the slumbering economic giant that was staggering a bit after the 1970s, a decade during which L.A. was busy re-inventing itself (again). The Bicentennial created an opportunity to commemorate our advance from pueblo to 20th century megalopolis, and several maps were drawn to celebrate our past glories.

The one seen here, part of a three-map set done for the Los Angeles Times by local artist Cathy Pavia, looks back at the first 100 years of L.A. Starting from our purported founding in 1781, this upside-down cake of a cartogram shows a reverse look at L.A.’s landscape, with Palos Verdes and Long Beach at the top and the San Gabriel Mountains at the bottom. There are plenty of details packed into the sheet, including representations of the earliest settlers, the Tongva tribe; note the grass hut domiciles made of willow or sycamore branches from once-strong trees that grew tall before the Missions and fundadores arrived.

Also visible are the starts and stops of the old San Gabriel Mission (1771), the new Mission (1776) and the original pueblo (1781), and a post-flood plaza (1815). Before the Dodgers and Lakers came to town, public sport spectacles included horse racing and the “bullring,” now known as the corn fields down below what was old Fort Moore Hill. The LA River flows here all the way to the Ballona wetlands, and the San Gabriel picks up and meanders all the way to Alamitos Bay in Long Beach. Several very important early vineyards are on the map, probably the acres of Jean-Louis Vignes (1833) or Wolfskill’s vines (along with his first orange groves, the ones that began the citrus industry in these parts).

There are some surprising and often forgotten facts about early L.A. history that Pavia also captured. Whaling is represented in San Pedro Bay, where the grand creatures were hunted for oil. Some 3,400 whales were killed along the California coast until the discovery of petroleum made the practice obsolete. The discovery of that oil was made near the La Brea Tar Pits, seen here as a source for pitch which locals used to seal up their roofs. Later, the Doheny family found a way to extract black gold from the ground where dinosaurs once trod.

Artesian wells, thanks to the direction of governor John Downey, are shown here as a 19th century tourist draw—not as impressive as Old Faithful, but not bad for L.A. The rather odd salt marshes of Redondo sit near the Pacific shore, where a 200 x 600-square yard salt lake provided seasoning for generations of Angelenos. The camels of Drum Barracks are also on the map, depicting a short-lived experiment that began at Fort Tejon during the Civil War (and ended in San Pedro when it was found that keeping camels happy is not as easy as it looks).

There are looks at the early infrastructure of Los Angeles, including the Sepulveda brothers’ four horse stage coach trail to the port city of San Pedro, and Phineas Banning’s first railroad, the “Los Angeles and San Pedro,” that allowed big industry to bloom in the city. The beginnings of the street car systems are evident along with the arrival of the Southern Pacific railroad in 1876, which transformed Los Angeles more than any other event in these hundred years.