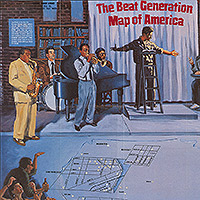 Short on cartography but long on information, this pictorial map gives a small glimpse at the brief (but cool, daddio) beatnik era in the southland. The main areas of activity in the U.S. are in New York City, the Bay Area and L.A. (particularly Venice). While Venice has seemed to be a counter-culture magnet since soldiers straggled back from World War II, the Beats started gathering there in the late 1950s because of low rents, street-level tolerance, year-round, fine outdoor weather, and a 1959 book by Lawrence Lipton entitled Holy Barbarians that romanticized the beatniks and made them a tourist draw.

Local papers categorized them as a lazy bums (not dharma bums), calling them “the beard and sandals crowd.” Local “squares” resisted the liberated beatnik lifestyle in their various neighborhoods; Angelenos of the day preferred their beatniks to be like Maynard G. Krebs or Ed “Kookie” Byrnes on TV. The establishment distrusted the beatniks just as they did the hippies, the punks, the grunge-crowd and even the grandpa hat-wearing hipsters of today.

This map mentions a few beatnik hangouts, but there were many dotting the local landscape, from Long Beach to Hollywood and even to little South Gate where the beat of the bongo, black leotards and berets were seen in dives dedicated to freedom of expression and all things cool. The soundtrack of the Beats was jazz, and this map gives a nod to several clubs that were renowned players in the Be-Bop rebirth that also took place here.

Bird in the Basket, or Jack’s Basket as it was sometimes called, was a place on Central Avenue where Charlie Parker played some legendary shows (including those after his release from Camarillo State Hospital). Dexter Gordon, Wardell Gray and Paul Gonzalves were regulars there, too. The Finale was a little club in Bronzeville where jazz greats played in the Little Tokyo area after internment displaced L.A.’s Japanese-Americans and opened the door for an African-American enclave.

The rest of the locations ended up in Venice, where the stars were aligned perfectly for this bohemian experience. While the movement was filled with culture in art, music and literature, the philistines of Venice wanted no part of the accompanying noise and traffic the Beats brought. The fight between the old residents and the beatniks was pretty much rigged in favor of the locals, even with the help of the legendary ACLU lawyer Abraham Lincoln Wirin. The Grand Hotel came and went as did The Wind Blue In and Cosmo Alley, where jazz and finger popping met free verse poetry.

Part of St. Mark’s Hotel survived with the struggle to preserve the Colonnades on Windward continuing to this day. Typical of the gathering places for the Venice branch of the Beat Generation were the Gas House, which was hipped up by Big Daddy Nord of the Hungry I in San Francisco,  and Venice West Café Espresso, which was opened by poet Stuart Perkoff and lived a short but colorful life. These beat community watering holes were captured in moody photographs that drew the rubes in droves to see these iconoclasts laughing at poverty while discussing philosophy, playing chess and reciting poetry.

Lawrence Lipton said what needed to be said during the trials to keep the Beat outposts alive in his poem Funky Blues for All Squares, Creeps, and Cornballs: They torture themselves with shame and pride/with time clocks and unattainable ambitions/they get so they believe the lies of their own hired liars/they bug themselves with their own advertising slogans/they drag themselves over miles of broken glass/and stone themselves with false ambitions.