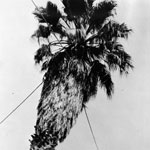 At first glance, the fan palm guarding Exposition Park’s Figueroa Street entrance appears unremarkable. Palm trees, after all, are a fixture of the Los Angeles skyline. But that unassuming palm may be the city’s oldest, a survivor of three replantings and a witness to more than 150 years of Los Angeles history.

Likely still a sapling when it was dug up from a desert canyon in the late 1850s, the tree was transplanted with several other young palms to San Pedro Street in present-day Little Tokyo. Over the next 30 years, the trees grew up as Los Angeles matured around them. In 1888, the Times called the palms, which had witnessed the town’s evolution from a community of less than 5,000 to a booming city of nearly 50,000, “among the oldest landmarks of Los Angeles.”

They may have stood as reminders of L.A.’s pre-boomtown past, but by then they also stood in the way of progress. A warehouse was planned for the lot on which they grew, and the site’s owner arranged to have the Southern Pacific Railroad remove the then 30-foot trees from his property. On July 26, 1888, one of the palms was boxed, placed on rollers, and moved several blocks to the site of the railroad’s new Arcade Station at Central and Fifth streets. (The fate of its siblings is uncertain.)

Replanted outside the busy passenger depot, the tree greeted thousands of newcomers over the next few decades. It made the city’s first impression on tourists and transplants disembarking at the station, a sign that they had reached the promised land of sunshine after a long journey west.

By 1914, the city’s growth again threatened the tree, when plans for a new, larger Southern Pacific station called for its removal. The Los Angeles Examiner led a successful campaign to save the historic palm, and, its roots boxed yet again, the then 75-foot tree moved for a third time to the Los Angeles Memorial Coliseum on Figueroa. There it survives today, now more than 100 feet tall and possibly the oldest living palm tree in a city of many.

Above: Workers prepare to move a landmark palm tree on San Pedro Street to its new location in front of the Southern Pacific’s passenger depot in 1888. Courtesy of the Photo Collection – Los Angeles Public Library.