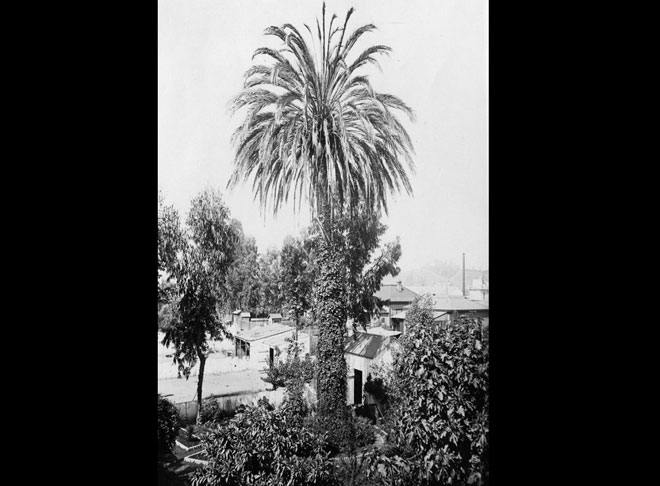 An 1888 view of the palm tree in its original Date Street location. Courtesy of the Photo Collection, Los Angeles Public Library.

Like Los Angeles’ oldest palm tree, what might have been the city’s first palm tree—already a mature specimen when the Exposition Park palm arrived—was a wanderer.

Descended from the date palms of Morocco’s celebrated Tafilalt oases, the tree emerged from the ground near the present-day site of Union Station around 1786. Planted for its fruit, it may have disappointed the gardeners who eventually found the local climate too cool for date production. Still, the tree had obvious value as an ornamental. So it remained, even as a pueblo of 100 people grew into a city of 300,000. As it aged the palm became a landmark, and the road it shaded—Lovers Lane—was renamed Date Street.

Then it suddenly became footloose. Perhaps threatened by development, it first moved in 1909 from its original location to a private residence at Sixth and Bonnie Brae. In 1924 it moved again when manufacturer and tree collector E. Clement Wilson purchased the historic palm and hired a landscaping company to transplant the 75-foot, 30-ton palm to his Fremont Place estate. The five-mile journey cost $1,500.

The ancient date palm had witnessed more than 150 years of Los Angeles history by December 26, 1942, when a violent winter storm battered it with high winds. The ground slick with rainfall, the tree lost its footing and fell, crashing into the roof of Wilson’s garden shed.