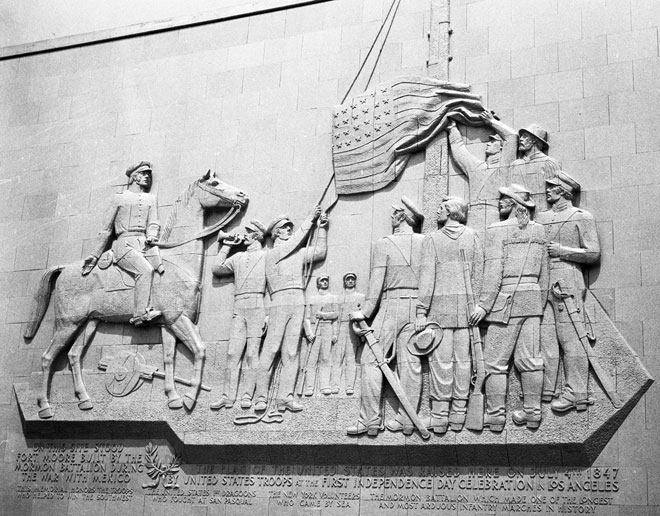 Gunfire greeted the rising sun on the Fourth of July, 1847. High above Los Angeles, in a fort occupying the city’s commanding heights, Lieutenant John W. Davidson lofted the Stars and Stripes up a 150-foot pine flagpole. A 13-gun salute answered the cheers of 700 armed troops. If dawn hadn’t aroused the residents of newly conquered Los Angeles, the cannons surely would have.

Los Angeles was a city under military rule. The ceremony—reenacted several times in the decades since and depicted on a little-known historical monument—marked the first official Independence Day celebration in California since American troops had marched into the ciudad of Los Angeles on January 10, 1847. Though the Capitulation of Cahuenga had paused hostilities in California, the war would not officially end until the following year’s ratification of the Treaty of Guadalupe Hidalgo.

In April, rumors raced through town of a pending counter-invasion by an army of 1,500 Mexican troops. American forces scrambled to build an adobe fort on the city’s high ground. Amid the hasty construction, American commander Colonel Jonathan D. Stevenson issued orders for a July Fourth ceremony “which should animate the heart of every lover of freedom.”

A proper display of the American standard was a prerequisite, so Stevenson hired local gardener Juan Ramirez to bring timber from the San Bernardino Mountains suitable for a flagpole. Ramirez, his army of Indian laborers, and a small military escort returned from Mill Creek on June 18 with 20 yoke of oxen and two pine tree trunks in tow. Carpenters spliced the trunks together to create a flagpole 150 feet tall.

After the sunrise flag-raising, the ceremony resumed at 11:00 a.m. Armed troops again paraded around the fort, this time for the benefit of an assembled crowd of Spanish-speaking residents. The soldiers named the half-completed fort after a fallen comrade, Captain Benjamin Daviess Moore. A 21-gun salute followed a reading of the Declaration of Independence, and the thunder of artillery fire echoed through town.