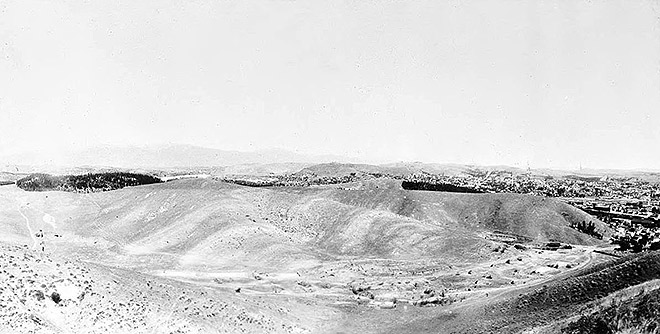 It’s doubtful that any prayers were said on Cemetery Ravine’s behalf when earthmovers filled in and paved over the gully to create part of the Dodger Stadium parking lot.

Early maps of Los Angeles show Cemetery Ravine as one of several canyons draining the Elysian Hills just north of the city’s center. Though typically bone-dry, occasional stormy weather sent raging torrents down the ravines. One took its name from a body of water—Reservoir Ravine. Another bore the name of a landowner and leading citizen—Chavez Ravine.

Cemetery Ravine was named for a Catholic burial ground. When it opened at the ravine’s mouth in 1844, Calvary Cemetery was located on what was then the outskirts of town. But the city grew fast, and the cemetery reached capacity within a few decades. By 1929, the Catholic Church had reburied most of the bodies at East L.A.’s substantially larger New Calvary Cemetery. The old cemetery site, where some remains were inadvertently left behind, became the campus of Cathedral High School (home of the Phantoms).

Meanwhile, by 1913 Cemetery Ravine had become one of the few connections between the rest of the city and the Mexican American community known as Chavez Ravine. To reach their home, residents would alight from a streetcar on North Broadway, pass the cemetery, and then follow steep Bishop’s Road up the ravine to their hidden hillside neighborhood. Like the cemetery, that neighborhood also disappeared.

In 1959, the earthmovers arrived. As the giant machines carved a bowl-shaped amphitheater into Mount Lookout to create Dodger Stadium’s grandstand, they filled in the adjacent ravines. To this day Cemetery Ravine remains entombed beneath tons of rock, sediment, and asphalt—and not a single headstone marks its grave.