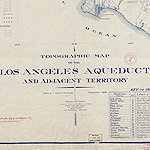 It is impossible to overstate the importance of the Los Angeles Aqueduct in terms of its part in transforming the old pueblo into the big-time metropolis it is today. Water has always been a precious commodity here, and early Los Angeles history is filled with plans to direct water to the citizenry, to store it in reservoirs, and to use it for sewage treatment and manage it in flood control.

Some of the most powerful civic officials before the turn of the century were the zanjeros, men who watched over the Zanja Madre (a big ditch off the river that provided much of the water). As the population boomed and the railroads connected the West Coast to the rest of the nation, the demand soon began to outweigh the supply. By 1904, Los Angeles was desperate to find other water sources, and entire neighborhoods were deprived of water during shortages.

One of the most knowledgeable water experts in the west was William Mulholland, a deputy zanjero for the Los Angeles City Water Company. Mulholland was given his job by the historically ubiquitous Frederick Eaton, the very man who stumbled upon the Owens Valley with its copious flow of melted snow from the eastern Sierra Nevada Mountains. The political battle to wrench this precious water away from the people of the Owens Valley is sometimes called the California Water Wars, but money and federal connections won out over the farmers up north.

Fred Eaton first had to sell the idea of sourcing water from Owens Valley idea to Mulholland, who mulled over many other plans but was finally swayed by the fact that he was to be head engineer in one of the greatest projects ever conceived in the U.S. After a great political struggle, Eaton, Mulholland and many other movers and shakers managed to get permission from the federal government to build a 233-mile pipeline down the length of California and won a bond issue to fund the $23 million needed to build the project.

The dream seemed impossible, though naysayers were assuaged by the fact that the water would travel all that way simply by force of gravity. As it turned out, Mulholland was the right man for this mammoth task, which involved 52 miles of tunnels, 57 camps for the 3900 workers (43 of whom died during labor) and three reservoirs. The original plan called for eight feet of tunnel dug from each end in the hopes of gaining 16-feet per day, but construction moved more quickly than anticipated and the project finished 20 months early. (Anyone who has ever had a contractor on his or her property can appreciate that miracle.)

The completed aqueduct started way up by Lee Vining on the southwest shore of Mono Lake and headed south down the Owens river, past Bishop, Aberdeen, through the Owens valley, past Lone Pine, Owens Lake, Freeman, the Tehachapi jawbone, and finally to Newhall in the south, entering the San Fernando Valley at the Cascades near Sylmar. On November 5, 1913, 30,000 celebrants showed up from all over the west to see the opening of tunnel 104. The water that once helped crops grow in the Owens Valley gushed down into the awaiting development of suburban Los Angeles.

Above: Topographic Map of the Los Angeles Aqueduct and adjacent territory, Water Department of the City of Los Angeles, October 1908