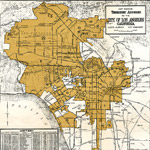 The annexation map of Los Angeles, as presented here from 1935, is the cartographic version of a Swiss Army knife. In terms of Los Angeles’ history, this multi-purpose map represents the broad scope of the city’s development over 85 years of growth.

At the center are the original four-square-leagues of the pueblo (28.01-square-miles) and the city at statehood with a population of 1,610. The accompanying panel gives the exact dates on which pieces of land were added to Los Angeles, including “the southern extension” (1/10th of a square mile that distinguished the new City Charter boundary line from the original pueblo boundary line), Highland Park in 1895, and 1906’s “shoestring,” the inventive 18.64-square-mile stretch that connects the harbor to city jurisdiction. Wilmington and San Pedro were annexed in 1909, giving Los Angeles the deep-water port it needed to become an economic powerhouse.

With abundant water on its way via the Los Angeles Aqueduct, smaller entities lined up to join the big city. Colegrove/ Hollywood/ East Hollywood came on board in 1910, and after 1913, big chunks of land expanded the city dramatically: the huge, 169-square-mile San Fernando addition opened up the Valley in 1915, and Westgate brought in 48-square-miles of West L.A. in 1916.

With the Panama Canal enabling West Coast commerce in 1914, continuing oil production, the movie business, mass-production of automobiles and the beginnings of tourism in post-World War I Los Angeles, the metropolis started to take form and spread outward. Surveyor C. W. Cook was at the ready and passed out these maps to hopeful land speculators at his offices in West Hollywood. Griffith Ranch was added in 1918, Laurel Canyon in 1923 (along with Eagle Rock), followed by Sunland (1926) and Tujunga (1932), bookending the colorful circus town of Barnes City in 1927.

When this map was published in 1935, the city was up to 450-square-miles with a population of 1.3 million. Los Angeles has gone on to add 200 more pieces to the puzzle with towns like Angeles Mesa, Rolling Hills, Calabasas and Chatsworth all joining in the fun.