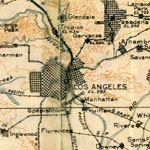 This is a look at Los Angeles at a time when the city was still considered remote despite its booming post World War I economy. Rider’s was the premier travel guide of the time but their map and description of Los Angeles leave a bit to be desired. Even though L.A. had just become one of the ten most populated cities in the U.S. when this pictoral was produced in 1925, Riders paints a picture of the city (population 850,000) as having only enough attractions “to occupy at most a week” of a visitor’s time. The map is quirky though—and oddly, informative on hiking. It includes area elevations, identifies rail lines, and lists rivers like the Rio Hondo, Los Angeles, San Gabriel, and Ballona Creek, and corresponds to the USGS topographic surveys covering the squares on this small sheet (San Pedro, Las Bolsas, Redondo, Downey, Camulos, Calabasas, Santa Monica, Pasadena, Tujunga, Fernando, and Santa Susanna are shown; Los Angeles and Hollywood were not yet available.) There is also some inclusion of the streetcar lines that stretched 591 miles within the city and 1150 miles in suburban areas around Southern California. As the map points out, folks could take the Pacific Electric railway to exotic Venice, faraway Mt. Lowe or to the badlands of Orange County.

Long gone place names dot the landscape, like Florence (now Watts), Clearwater (now Paramount), Sherman (now West Hollywood), Walteria (now Torrance), and even Savannah, the old pioneer cemetery in the San Gabriel Valley. The Los Angeles metropolitan area occupies a big lattice at the center where visitors might patronize the many restaurants, tea-rooms, and cafeterias around downtown, and stay in the highly-recommended Westlake Park and Wilshire Boulevard area for the lordly sum of $5 a night. Nice and clean apartments from $35 a month or luxury suites at more than double that price were also available at the time.

Above: Rider’s California: a Guide Book for Travelers, Los Angeles and Vicinity by Arthur Fremont Rider, 1925