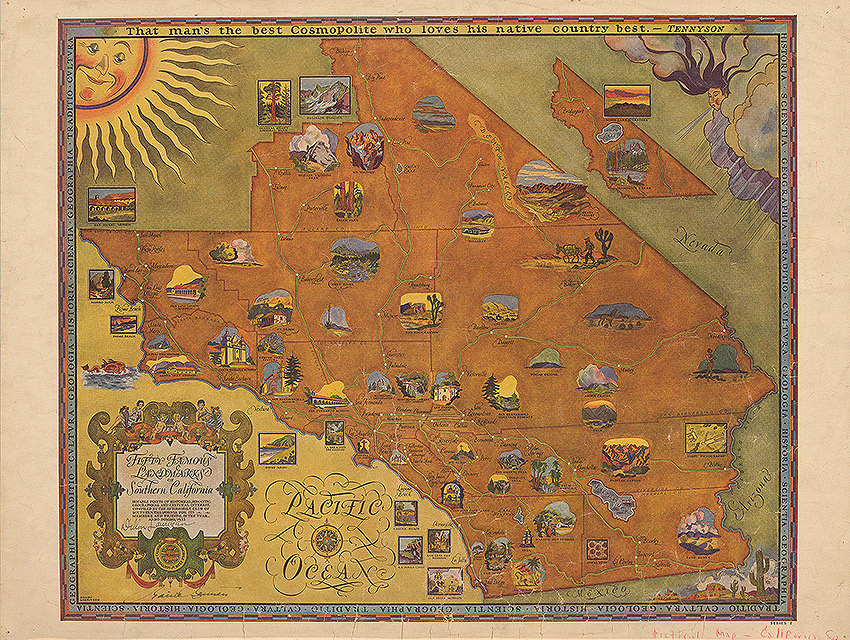 In the 1930s, most of the country was focused on trying to survive the depression. Los Angeles, on the other hand, had no problem angling for the scant tourist dollars spent by the few folks who were capable of affording vacations. Instead of boarding a pricey steamship set for the French Riviera or the Greek Islands, travelers could come to the sunny West Coast and experience the good life of Southern California (because who needs Europe when you have L.A.?).

Notice the two beckoning maidens floating near the map’s title (click here to enlarge) and gently cradling the cornucopia of the verdant southland. They hover above two cherubs who are a somewhat literal representation of the City of Angels. Old Sol himself smiles convivially down from the upper left corner while rain clouds flee eastward toward poor Arizona.

The typically beautiful creation of expert pictorial mapmaker Dillon Laurintzen is long on artistic design and somewhat economical on landmarks. Around the map’s border are the Latin words for “history,” “science,” “geography,” “geology,” “tradition,” and “culture,” which act as bookends for the verse of Alfred, Lord Tennyson describing the cosmopolite Californian who oversees these treasures. Laurintzen was a successful graphic artist and water colorist in the Los Angeles area who managed to become the art director of the Automobile Association of America. He was a terrific cartographer and often illustrated stories for Touring Topics Magazine (later Westways) and also dabbled a bit in films as a cartoonist. I consider him one of the greats of the pictorial genre.

The landmarks that Laurintzen has chosen to highlight here are a strange mix, with the newly refurbished Olvera Street rubbing shoulders with the esteemed Huntington Library and the 100-inch Hooker telescope at the Mt. Wilson Observatory vying for attention alongside the “La Brea Pits.” The Mission period is represented at San Fernando and San Gabriel while the phenomenal oil boom of Signal Hill is seen in the top forty. Laguna Beach takes the spot of oceanfront attraction along with the La Jolla Caves and Pt. Mugu.

As a matter of historical fact, many of the landmarks are missions, but there are natural features such as Death Valley, Palm Canyon, Red Rock Canyon and the possibility of snow frolics in the San Bernardino Mountain resorts. To the north east, Mighty Mount Whitney and the Sequoia National Park sort of stretch the Southern California boundary a bit (as does Owens Lake, whose water was being “used” by Los Angeles at that time).

Not to be without humor, Laurintzen includes poor little Skidoo up in Inyo county at the edge of Death Valley, a ghost town that had once seen a hiccup of a gold boom. The town took its name from the slang of the time, “23 skidoo,” which meant “to leave quickly” (which most people did after striking out in the area’s dried up mines).