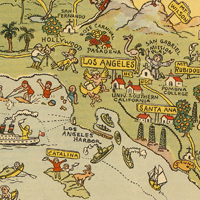 This map of Southern California, just a slice of Joseph Jacinto “Jo” Mora’s 1927 map of the 31st state, is a perfect example of the cartographer’s genius. The art form of pictorial mapping was reaching its peak in the late ‘20s when Mora, a multi-talented artist, took to mapmaking as a sideline to his career as sculptor, writer, book illustrator and cartoonist.

His efforts resulted in a series of masterpieces, including several stunning maps of California and one light-hearted masterpiece of Los Angeles. This is just one version of several of the golden state in the flush period before the great economic crash, and everything is hunky dory, which fits into Mora’s jocular observations of the charms of our native shores. Even his descriptions are flowery: “from rugged peaks of perpetual snow to dreamy sub tropic strands, the Golden State of California becomes the Playground of the World.”

Although Mora liked to keep it fun, he was a master of portraying the history of an area while detailing current affairs. Seen here are frolicking angels representing Los Angeles, the “Rose Carnival” in Pasadena (the theme of the year was “songs in flowers”), a trolley heading up to Mt. Lowe, and an outdoor love scene being shot in Hollywood. The San Gabriel Mission Play was premiering at the brand new San Gabriel Mission Playhouse, the Carnegie Observatory up on Mt. Wilson had the grand 60” and 100” telescopes of George Ellery Hale, and the S.S. Calawaii was a celebrity-filled ship that took folks all the way across the Pacific to Hawaii on weekly sailings.

Little touches make all of Mora’s cartes delightful. Here I particularly appreciate the goats on Catalina Island, the Alligator Pears from Fallbrook, how USC and the very new UCLA (marked as just UC) sit side by side, and the prohibition-stifled boozers singing “How Dry I Am” while high tailing it across the border for a drink in “TiaJuana.”

Above: California by Jo Mora, published by A.M. Robertson, 1927