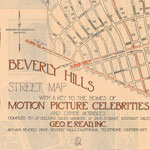 Several fascinating stories are told in this 1926 combination real-estate come-on and map to the stars homes that heralded the development of one of the most glamorous neighborhoods in Los Angeles. The flamboyant and tireless realtor George E. Read was selling the dream of “the scenic masterpiece” of Beverly Crest where celebrities and other notables would live in idyllic splendor. Beverly Hills was already being subdivided and its winding roads and landscaping was in place to lure big money to one of the most beautiful natural places in Southern California. Originally part of Rancho Rodeo de Aguas, Beverly Hills took shape after the turn of the century under the direction of Burton Green and landscape architect Wilbur D. Cook. After the luxurious Beverly Hills Hotel was completed in 1912 stars began to look at this garden spot as a place to build their mansions and put down show-business roots. One of the first was the famed Pickfair estate that was built on the site of a former hunting lodge in 1919 by Douglas Fairbanks and Mary Pickford. Many other Hollywood luminaries followed suit as showcased by the map.

George Read saw an opportunity and trumpeted to the Motion Picture crowd that “the windows of your homes will be beautiful paintings in themselves, framed vistas of the city of Los Angeles, the green Beverly Valley, the Santa Monica Mountains and the blue Pacific Ocean.” Despite talkies being in the experimental stage and many of the stars just at the beginning of their careers, the amount of dough the film industry would generate in the coming years led to a real estate bonanza. Read and others would see his fantasy become reality while buses and cars of gawkers followed the handsomely tailored landscapes shown on maps with hopes of catching a glance at stars like Charlie Chaplin, Lillian Gish, Harold Lloyd, Gloria Swanson, Lionel Barrymore, Theda Bara, and Buster Keaton, who at the time was starring in his big hit of 1926: The General. Even Rudolph Valentino, who would die within the year, has an address listed. The “other notables” listed are big oilmen like Earl Gilmore, Edward Doheny Sr. and Jr.; film directors like King Vidor, Thomas Ince, and Ernst Lubitsch, and the incomparable screenwriter Frances Marion with hubby and silent cowboy film star Fred Thompson. Even the famed auto racer Barney Oldfield is shown to have taken a place on Foothill Road. Cars and buses still tool around the neighborhoods represented on George Reed’s map today.

Above: Beverly Hills Street Map with a key to the homes of motion picture celebrities and other notables by George E. Read, 1926