Home Uncategorized CityDig: Is This 19th-Century L.A.’s Most Eccentric House? 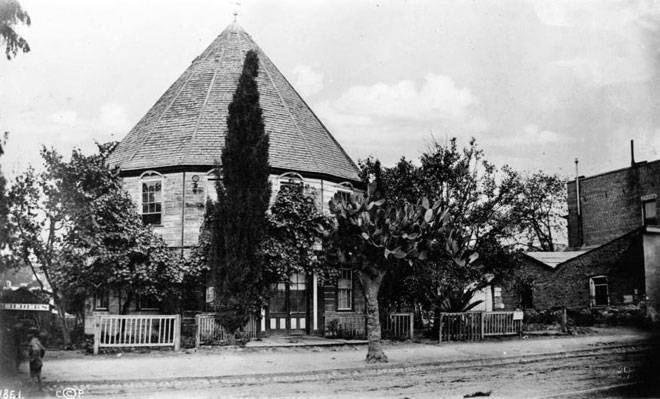 George Lehman’s house—a cylindrical, two-story adobe dwelling topped with an oversized umbrella-shaped roof—was as eccentric as its occupant. Surrounding his curious structure at Third and Main downtown was a detailed reproduction of the Garden of Eden.

Fellow Angelenos may have given Lehman, a German immigrant, the sobriquet Round House George, but the house owed its origins to French sailor named Raimond Alexander. After settling in Los Angeles in the late 1840s and marrying into the city’s Spanish-speaking high society, Alexander built the circular domicile for his new wife, using as his model a structure he had seen on a voyage to Africa. After Lehman purchased it from the Alexanders in 1856, he paneled the exterior in wood, giving the structure a polygonal shape.

A prophet of Southern California’s horticultural potential, Lehman resolved to recreate Eden on the dusty lot surrounding the house. With buckets for irrigation, he planted shade-giving pepper trees and built arbors that soon crawled with vines. A small cabbage plant grew into a freakish, 15-foot tree that over five years produced 40 dishes of coleslaw, 40 dishes of sauerkraut, and 25 bowls of salad.

By 1858 visitors were paying a small admission fee to tour Lehman’s “Garden of Paradise,” which he adorned with whitewashed cement statues of Adam, Eve, Cain, Abel, and the mischievous serpent. An orange tree stood in for the Tree of Knowledge.

In a city with little green space, Angelenos flocked to the Round House to sip beers underneath Lehman’s pepper trees. It became the center of Los Angeles’ German immigrant community as well as a popular outdoor meeting place for the general public. The city hosted its American centennial celebration there on July 4, 1876. But Lehman, who owned properties across the city, overextended himself. His San Francisco bank foreclosed on the Round House property in 1879. Without Lehman’s green thumb, the garden withered away. The Round House itself became home to Southern California’s first kindergarten, founded by German schoolteacher Emma Marwedel, before the land boom of 1887 swept it into oblivion.

Above: A view of the Round House on Main Street circa 1885, shortly before it was demolished. Courtesy of the USC Libraries – California Historical Society Collection.