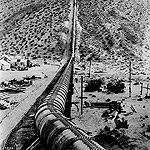 It’s likely that no public works project in Los Angeles’ history has inspired as much controversy as the Owens Valley aqueduct—controversy that has often overshadowed the engineering wizardry behind the project. Diverting the flow of the Owens River for 233 miles across the desert was difficult enough, but the aqueduct’s designers accomplished the feat using gravity alone.

On paper, the idea of the Owens River (elev. 3,800 feet) flowing downhill to Los Angeles (elev. 1,200 feet at Upper Van Norman Lake) seems straightforward enough: the aqueduct’s water drops an average of 11 feet for every mile it travels. But steep mountain ridges and yawning canyons separate the two points. To conquer the complicated topography, between 1907 and 1913 a construction force of some 4,000 workers bored tunnels, dug canals, and constructed 23 siphons—pressurized tubes that navigate the aqueduct through its trickiest segments.

The Jawbone Canyon siphon, pictured above in a photograph from the California Historical Society Collection at the USC Libraries, is among the aqueduct’s most impressive features. Workers assembled the massive steel pipe (measuring 8,095 feet in length and up to ten feet in diameter) in 36-foot, 25-ton segments, each hauled to the work site by a team of 52 mules. Water falls through the tube, 850 feet to the canyon floor, generating hydraulic pressure that then forces it up and over the opposite ridge without the aid of a pump. At the aqueduct’s deepest chasm, William Mulholland and his engineers accomplished the impossible: they made water flow uphill.