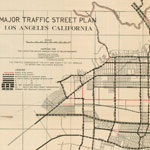 Click to enlarge. Prepared for the Major Highways Committee of the Traffic Commission of the City and County of Los Angeles by Frederick Law Olmstead, Harland Bartholemew, Charles Henry Cheney.

This map details one of the early attempts to deal with the terrible traffic problems that were beginning to envelop city streets. In post-World War I Los Angeles, mass produced automobiles battled buses and streetcars to a draw, especially downtown. Accidents were on the rise and drivers had few alternatives to the main thoroughfares. The Traffic Commission set out to find a way to alleviate the automotive chaos and began a two-year study that culminated with this map, filled with suggested alterations of the city’s roads. Before the idea of freeways, it was hypothesized traffic could be cured by widening some roads to as much as 1,000 feet, making early bus or streetcar lanes, and creating streets where only passenger vehicles would be allowed. With famed landscape architect Frederick Law Olmstead, urban planner Charles Henry Cheney, and transportation planner Harland Bartholemew on board, there was also an aesthetic component to the plan. The holy trinity set out to turn Los Angeles into a functional but beautiful city where citizens could move about freely in public or private transportation. The map accompanies a detailed description of the main arteries of transport. many of which are drawn with a minimum of 110 feet between curbs and a twenty-foot wide sidewalk on each side. It was this very study that suggested that large streets downtown be converted to one-way onlys. The process took many years to complete and the results baffle visitors to this day.