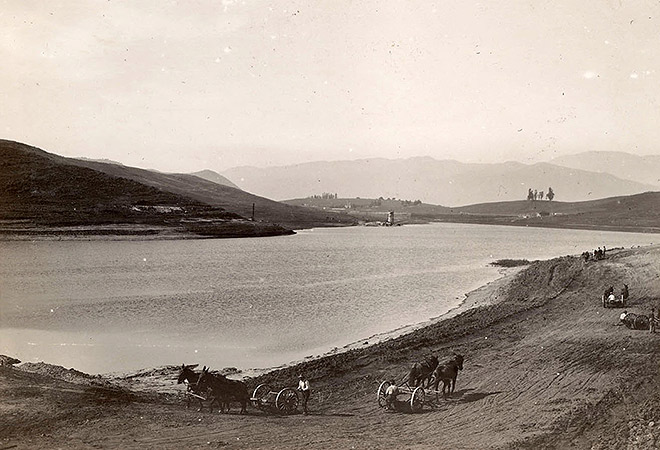 With his stalwart dam of concrete and steel in place, William Mulholland began flooding the meadowlands of Ivanhoe Canyon in November 1907. The waters rose, sedges drowned, and red-winged blackbirds fluttered away in search of undisturbed wetlands. Within a few months, Mulholland had created Silver Lake.

Silver may have donated his name, but Mulholland contributed his engineering acumen to the project. To create the dam, Mulholland first encased a wall of riveted steel plates in three feet of concrete. He then turned hydraulic jets upon the floor of Ivanhoe Canyon, sluicing away a deep trough and flinging the detritus uphill upon the concrete to create a reinforced earthen dam. Once completed, the new reservoir ensured a constant supply of water for Los Angeles. Its 767 million gallons—pumped from the ground beneath the Los Angeles River near Griffith Park—could quench the city’s thirst for three weeks uninterrupted if all other sources suddenly turned dry.

Silver Lake also doubled as a scenic and recreational asset. Unlike nearby Ivanhoe Reservoir—completed a few years earlier and covered in wooden boards—the new lake lay bare to the world, offering itself up as scenery. A stock of black bass attracted fishing, and the then-unfenced lakeshore invited Angelenos to stroll around their drinking water supply. By 1912 the city’s parks department had planted more than 2,000 eucalyptus trees on the slopes of Ivanhoe Canyon, and a utilitarian water storage facility had become a prized public space.