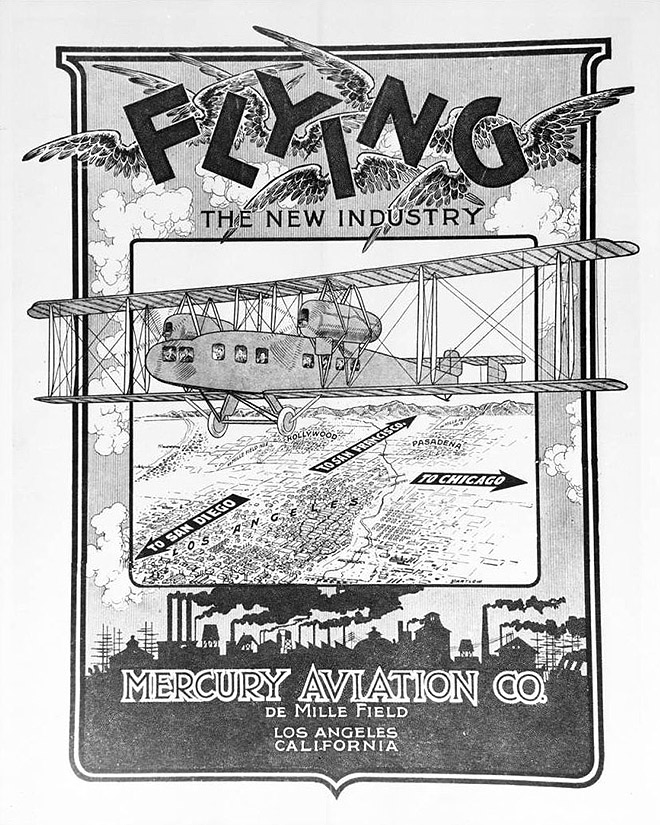 Cecil B. DeMille had already pioneered one Los Angeles industry, and in 1920 he was on the cusp of launching another: as president of the newly formed Mercury Aviation Company, DeMille was pursuing the ambitious goal of inaugurating regularly scheduled airline service between Los Angeles and other West Coast cities.

Mercury’s headquarters: a barley field at the northwest corner of Wilshire and Fairfax (then Crescent Ave.) where the company had cleared a primitive runway, built a hangar, and opened a filling station that refueled airplanes on one side and automobiles on the other. The aerodrome doubled as a shooting location for aviation stunts, but the real stars here were Mercury’s fleet of Junkers-Larsen monoplanes. Built of lightweight corrugated aluminum, the planes could soar to altitudes of 20,000 feet, propelled by a single 185-horsepower engine. And thanks to a sealed cabin, passengers could fly without goggles and other special gear.

To demonstrate the comfort and convenience (not to mention safety) of air travel, DeMille staged a round-trip flight to San Diego with a few of Los Angeles’ titans of industry. On September 9, 1920, DeMille and his guests took off from the Mercury airfield at 12:25 p.m. and touched down at 1:35 p.m. in San Diego—a trip that then took four hours by train or five by automobile. The party then lunched at the Hotel Coronado before reboarding the plane and returning to Los Angeles by mid-afternoon. DeMille’s demonstration flight avoided mishaps, but an alternate fate might have created a local power vacuum; among DeMille’s passengers were Times publisher Harry Chandler and the presidents of Southern California Edison and First National Bank.

Ultimately, DeMille never succeeded in creating L.A.’s first commercial airline—an idea that was probably ahead of its time. Just a year after his demonstration flight, DeMille and his associates sold Mercury Aviation to Emery Rogers. What had been DeMille Field became Rogers Airport, and by the 1930s the city’s burgeoning Miracle Mile district had absorbed the onetime airfield.