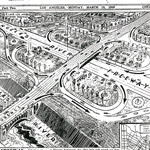 This rosy cartographic view of the “soon to be built” Los Angeles River Freeway is one part reality and several parts fantasy. In the post-war freeway fever, all of California was being sized up for automotive rapid transit, and the idea of connecting L.A. with Orange County and Long Beach seemed like an essential piece in the puzzle. The real Los Angeles River Freeway came into being six years later in 1952 and was officially known by its Interstate highway number, Route 15, until 1964. It then became State highway Route 7 until 1983, when its name changed to California State Highway 710 (or “the 710,” as locals say), which is now one of the most traveled upon roads in the county.

Indeed the same highway, known since 1954 as the Long Beach freeway, certainly has offered sometimes-rapid transportation for millions of cars, particularly big rigs hauling freight down to the harbor in San Pedro. The 1958 Master Plan of freeways created by the Metropolitan Transportation Engineering Board had the Long Beach freeway occupying a key hub in the network that would allow motorists to traverse the county efficiently.

Another dream expressed on this map is the city beautiful ideal, with public spaces, roaring fountains and an impressive Florence avenue bridge that makes the Los Angeles River Freeway look very idyllic indeed. Unfortunately, anyone driving over the 710 freeway on Florence during rush hour knows that it is a far cry from the sweet scene imagined here. What’s more, had the bridge pictured here been built, it might have been disastrous during the occasional winter deluges in Southern California. A much more utilitarian structure exists today, and like many local bridges, it is in dire need of repair.

The original plan for this Los Angeles River Freeway called for an 18-½ mile link between the city of Long Beach and Pasadena, but by the time the road hit Alhambra the local populace stopped it in its tracks. That being said, highway officials have yet to give up on lengthening the road. The $2 billion, 6.2 mile extension through Pasadena and other communities is still being debated rather heatedly in places where homeowners would be displaced and locals would be forced to endure years of construction and has been a subject of great interest to preservationists and citizen groups for the past 40 years.