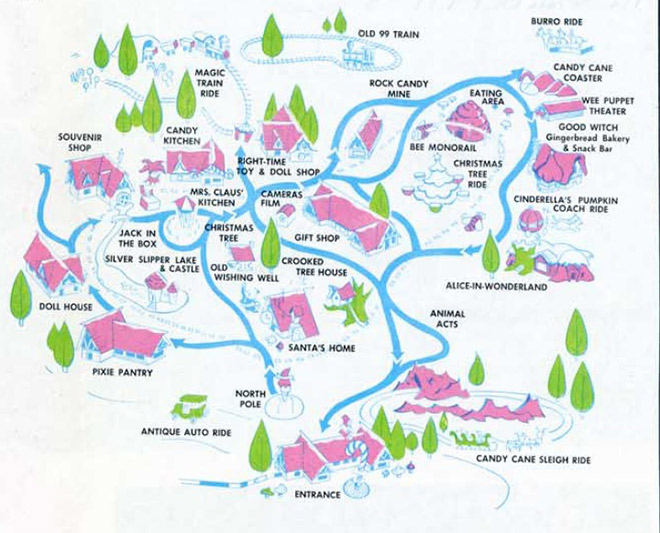 It might seem strange in Los Angeles for there to have been a winter-themed amusement park (though as the old adage goes, we all want what we can’t have), but just an hour-and-a-half up into the San Bernardino Mountains laid the magical winter wonderland called Santa’s Village. The park was situated near Lake Arrowhead in an area known as Skyforest, which even has a sweet holiday ring to it. And from the beginning, folks flocked to these 15 snowy acres nestled in the Ponderosa Pines right off of Rim of the World Highway.

Santa’s Village was an extra-special Christmastime destination for generations of Angelenos dating back to its opening in June of 1955 (a month ahead of another beloved Magical Kingdom in Anaheim). Conceived by Glenn Holland as part of a series of such parks, the land was leased from the Henck family, who owned a few hundred acres in the surrounding forests.

J. Putnam “Putty” Henck was an accomplished civil engineer and contractor who turned the idea into reality using mostly local sources (including all the timber used to create the fantasy park). The result was expectedly enchanting: How much more fantastic could a place be than to actually contain Santa Claus’ home, a doll shop, mushrooms that doubled as elfish dwellings, and live reindeer roaming alongside baby animals begging to be petted?

For the olfactory sense there was a Candy Kitchen that churned out sweet temptations, and a gingerbread bakery that filled the park with delightful smells. A surplus of rides to kept the kids away from too many sweets (including the very charming Lollipop Lady, who was actually Mrs. Henck) including a Ferris wheel, an autopia-like antique auto ride, several trains, a candy cane sleigh ride and roller coaster along with the rollicking Bee Monorail. More than anything the gentility of the place made it unique, as the Henck family ran a hands-on operation that gave children the illusion they really were at Santa’s Village.

Money was not used in the park, but a passport was issued and stamped, and the bad news came at the very end. However, admission in the early years was a buck for adults, and little ones were admitted free.

Like any amusement park, there was a point when parents’ fatigue began to show (and most SoCal families were ill-equipped for actual cold weather), so there were several theater respites that offered puppet shows and musical reviews along with, of course, souvenir shops where treasured mementos could be bought.

The Vintage Santa’s Village Theme Park Is Back, and It’s Quaint as All Get-out