Home Uncategorized CityDig: Hiking in the Wonderful Mountains of Southern California in 1918 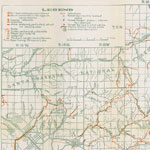 There was a lot more to Pacific Electric Railway than meets the nostalgic eye. Every foot of its thousand miles of track was the work of lots of people, from the workmen who sweated to put down the rails to the lawyers who wheedled real estate deals and an inventive marketing department. While the Pacific Electric Railway might be known for linking urban areas, it also connected the people of Los Angeles with the delights of the wilderness above the city. This map was developed with R.H. Charlton, the director of the Angeles National Forest (which was fairly new at the time), to enlighten locals about the rural areas that could suddenly be reached by streetcar. From the Hill Street station downtown or the Main Street station in Pasadena, Angelenos could cruise up to trail heads in San Fernando, Pasadena, Mt. Lowe, Sierra Madre, Monrovia, Las Lomas, Azusa, Glendora, San Dimas, and Upland. The map’s suggested hikes vary from one day to three hours long, and offered folks pristine vistas and bucolic locales such as Wolfskill Falls, Alpine Tavern on Mount Lowe, Deer Park, Fish Canyon Falls, and the summit of Old Mount Baldy. The map, which can be folded up and kept in a pocket, also contains a legend for places where hikers could obtain supplies, locate good fishing spots, discover spectacular views, hire guides or packers, and even make a telephone call. Its backside contains thorough descriptions of the joys of each hike, plus directions from the streetcar to the wilderness.

Above: Map and description of trails, entrances to which are quickly reached via Pacific Electric Railway, J.R. Blackwell c. 1918