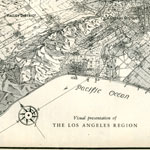 This hybrid panoramic/relief map of the greater metropolitan area of Los Angeles was done by one of the unsung heroes of local cartography. Artist and Urban Planner Henry V. Wall drew superb maps for the Planning Department for 32 years before retiring to the private sector in the mid-1950s. This particular beauty was included in the 1946 Renie Commercial Atlas of Los Angeles. Wall captures the dramatic setting of the sprawling landscape with the transverse mountain range encircling the Valley District, the Central District, and the foothill communities to the east. The petroleum industry is represented by oil fields dotting the southern sections, as is the Harbor District, which had been essential to the recently concluded war effort. The landmarks of Los Angeles county are easily seen: the Palos Verdes Peninsula, the Santa Susana, Verdugo, and San Gabriel mountains along with piers dotting the coastline from Venice down to Long Beach. The freshly concrete-encased Los Angeles River is also visible, flowing from the Simi Hills down through the valley, around downtown, over the flatlands of the southeast, and into its mouth in Long Beach.

This map depicts a city one year away from the comprehensive freeway plan that would transform the area into an automobile-dominated landscape. The six-year old Arroyo Seco Parkway is the only true freeway on the map, but many main arteries are represented by Wall including Figueroa, Sepulveda, Ventura, Whittier, Manchester/Firestone, Mission, Pico, Olympic, Wilshire, and Sunset. Highways in and out of town stand out with numbers 66, 101, 99, 10 and 60—they later turned into freeways named the Foothill, the Hollywood, the Santa Ana, the Santa Monica, the San Bernardino, and the Pomona.

Above: Visual presentation of the Los Angeles Region prepared in the Department of City Planning by Henry V. Wall, 1946