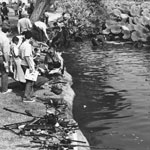 Archaeology wasn’t on the agenda when the city began removing 40,000 cubic yards of sediment from the bottom of Echo Park Lake in 2011. But the historic lake’s two-year overhaul, which culminates this weekend in the park’s grand reopening, became an archaeological dig of sorts as workers discovered buried relics from L.A.’s past.

Many of the objects found on the lakebed come with plausible explanations—it’s easy to imagine an errant Frisbee gliding underneath the lotus beds, or a runaway skateboard sinking underneath the catfish at the lake’s bottom. Even the castoff toilet fails to arouse suspicion, if not amusement.

But three weapons found amid the silt and sludge—two pistols and a rifle—demand an account of their arrival on the lake bottom. The guns, alas, will never reveal their secrets. The LAPD plans to destroy the weapons, as rust has eaten away any value they may have once had as meaningful evidence.

It’s unclear how long the guns lay hidden beneath the surface. Water first filled the lake’s basin around 1868, when the Los Angeles Canal & Reservoir Company erected a 20-foot dam across the ravine of the Arroyo de Los Reyes and diverted part of the Los Angeles River’s flow into the new reservoir—made into a public park in 1891. The city dredged the lake in 1948 and in 1984 drained it, allowing scavengers to pick through the accumulated debris with metal detectors and shovels. But the guns may have eluded past cleanups. Other discoveries—like a hundred-year-old wagon wheel and axle—suggest that previous efforts were not as thorough as the two-year rejuvenation wrapping up this weekend.