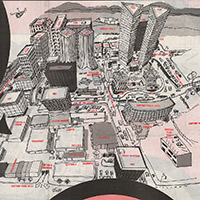 The last of a 1980s triple-blast from the past is this look at a mid-decade Century City, conceived as far back as the 1950s to be a self-sufficient burg within the bigger metropolis of L.A. The master plan was developed by Welton Becket and Associates for Spyros Skouras, the president of Twentieth Century Fox, and attorney Edmond Herrscher, but downturns in the big studio’s productions (see: Cleopatra) forced a sale to the Aluminum Corporation of America guided by developer William Zeckendorf for the huge sum of $300 million bucks.

Century City was built on the old back lot of Twentieth Century Fox studios (which, fun fact, was also once the ranch of silent film star and high-roller Tom Mix). ALCOA’s team designed Century City in 1960 with exaggerated, wide boulevards and landscaped plazas that emulated the grand streets of Europe save for the skyscrapers that would give the island of development a skyline visible all over the basin. This risky venture was the biggest and most expensive private development in the United States at the time and came with a workload that was projected to spill over into the ‘90s.

The Century City of 1985 had two entities spread out over 260 acres, including a residential component with condominiums alongside retail and commercial interests that included 5.5 million square feet of office space. It was intended to be a modern micro-city, one where pedestrians lived within walking distance of all of their needs (no mention of bicyclists) and used bridges to pass from building to building without having to risk life and limb crossing vehicular traffic on the boldly named Avenue of the Stars, Constellation Boulevard, and Century Park East and West. Twentieth Century Fox was (and still is) next door as was the ultra-exclusive Los Angeles Country Club.

The map shows a mix of banks, high-end department stores, hotels, boutiques, restaurants, a hospital, the Playboy Club, CBS Records, NCR (National Cash Register), an Auto Club office, and even a Gelson’s market. Old timers might remember doggedly searching for underground parking for the Plitt Century Plaza Theaters, where films included The Emerald Forest (in 70 mm.) or the “unforgettable” Red Sonja with Arnold Schwarzenegger. Those with different cultural tastes might have visited the deluxe Schubert Theater, where they’d have watched “the best show to hit Los Angeles in many a year” (Dreamgirls) or the L.A. run of Cats.

The Century Plaza Hotel, a beehive of activity in and of itself, played house to visitors who could book flights on half a dozen airlines, buy a fur, admire art in the gallery, dine at the Vineyard or Yamato, purchase a camera, or have cocktails at any one of several nightspots. Over the years the hotel became a favorite with politicians who held receptions after elections and spread some money all over the stores in the complex.

All this Century City charm was just ten minutes from Westwood or Beverly Hills and twenty from the Pacific Ocean. The “city within a city” is thriving still and is home to almost 6,000 Angelenos.