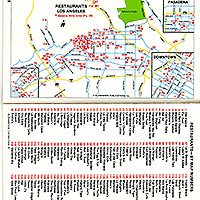 Few recollections of L.A.’s good life elicit the delicious type of nostalgia associated with favorite restaurants past. It wasn’t the just food but the overall experience of unique Los Angeles dining establishments that left a mark on our memories (and waistlines).

In casting back to the 1980s with this map, we see a time when Los Angeles was developing the palate for fine food and ethnic adventure. That rather flush decade brought an influx of restaurateurs to the city, but while certain memorable spots sprung up at lightning speed, others sadly disappeared in record numbers. So it is with much mouth-watering reminiscence that we must look over this yummy, albeit incomplete, map.

Often, an Angeleno’s eyes will glaze over as they recall the glories of repasts past and restaurants that made lasting impressions on their culinary memories. Don’t believe us? Just mention beef Wellington at the Windsor, drip coffee at Perino’s, famed chili at Chasen’s, melt-in-your-mouth sand dabs at the Fish Shanty, Mu Shu pork at Madame Wu’s, Paella at La Masia, Cobb salad at the Brown Derby, Swedish meatballs at Scandia, yellowtail sushi at Katsu, custom cheeseburgers at Cassell’s, groundbreaking pizza at Spago, massive lobsters at the Palm, or eggs benedict at the Pacific Dining Car and watch what happens. But while this map has many a favorite represented, there are great spots that fail to rate a square of place. Anyone hanging around downtown L.A. in the 1980s would long for the true-cool ambiance and cheap pierogies found at Gorky’s on 8th, the amazing and gut-stuffing breakfasts at the great Vickman’s on 9th, the historic fountain and grill of Blair’s across from Robinsons, and discoveries like El Nica of (Nicaraguan origin) and Tikal (where Guatemalan cuisine won over diners).

Some of the places on this map were about total experiences, meaning the food was simply one part of a greater adventure: Dar Maghreb featured a full Moroccan feast while sitting on the floor, Lucy’s El Adobe was a hub for lunchtime people-watching, and the divine piano stylings of Johnny Guarnieri filled the bar at the Tail of the Cock. And let’s not forget the high-spirited Monday Night Football buffet-happy hours in 1980s Acapulcos, after-hours at the Atomic Café, the post-work suit and tie crowd at the Bull and Bush, Flamenco dinner-dancing at El Cid, rustic brunch at Café Four Oaks, the carved bar at Yee Mee Loo, the Mexican dining extravaganza at La Villa Taxco, or even the lingering grooviness at the Source on Sunset.

There were also celeb-sightings galore at certain ‘80s places: John-John Kennedy at Angeli, Richard Pryor at Maurice’s Snack and Chat, Robert DeNiro at DanTana’s, Steven Spielberg at the Palm or any number of hopefuls at Kate Mantilini’s (for late pasta), at Caribbean-themed Cha Cha Cha on Virgil, or at Michael’s in Santa Monica for power lunches. Rock and rollers were often spotted at Patrick’s Roadhouse on PCH or Duke’s Tropicana in Hollywood for hangover brunch.

Some of the old Los Angeles classics seen here were fading by the year this map was made (1986): Perino’s closed later the same year, while the Brown Derby, Old Vienna, the Nickodell, Scandia, and Chasen’s along with high-end French restaurants with l’, la, or le in the title eventually closed their doors. Others popped up, made culinary noise, and then ran out of time and money like Simon’s Inflation Fighter in Silver Lake.

A few classics are still standing because of the food and a love of traditional restaurants. Yamashiro, Musso and Frank Grill, Les Freres Taix, Lawry’s, the Pacific Dining Car, El Cholo, the Original Pantry, Antonio’s and La Villa Taxco are still packing them in and serving much of the same stuff they did in the good old ‘80s.

Still, one can’t help but wonder where many of the dishes associated with the 1980s went: boned squab stuffed with wild rice (Perino’s), marinated rabbit sauce ravigote (Brown Derby), frog legs provencale (Robaires), or calves sweetbreads sauté mascotte (the Windsor). Perhaps this will be a year for a gastronomical ‘80s comeback.