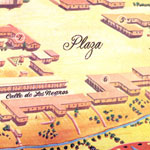 This map, produced in 1950 for a DWP brochure on the history of water in Los Angeles, does a very nice job of painting a three-dimensional picture of the layout of the pueblo of Los Angeles at the time of statehood while including historical landmarks from the golden age of the plaza. There are many details (and streets) left out but the information that is included is loosely drawn from the Ord Survey, the first surveyed map of the city, which was made in 1849. Oddly, the famous zanja water delivery system is underplayed here, but it appears at the bottom of the drawing, meandering through the orchards and vineyards that were below the plaza. Still, the early story of the city is the history of the pueblo and there are many L.A. tales in this small map.

This is close to what the plaza may have looked like after it was moved in 1815 from the original spot, with homes built in the Spanish colonial model fanning out around the central plaza. The homes closest to the plaza were originally owned by the most prestigious pioneers, but housing needs soon pushed the area’s boundaries outward. Prime spots including the Lugo Adobe (built in 1840), merchant/banker John Downey’s home, Francisco Ocampo’s spread (where cockfighting was a cruel yet popular form of entertainment), and the lavish house of Jose Carillo, considered the center of social life in early Los Angeles, ring the plaza. As streets grew out of this original plan, they began to stray south.

Many of the buildings marked here did not exist when Ord first surveyed the pueblo but they represent Los Angeles history both before and after the date presented here. There is the Bell Block at Aliso and Los Angeles (once Canal Street) where Colonel John C. Fremont maintained headquarters during the Mexican-American War right across from the Arcadia block that was built by the richest man in the county, Abel Stearns, for his beautiful young bride, Arcadia Bandini, in 1858. Olvera Street is shown here but it was not actually named that until 1877, when the passageway changed from Wine Street to Olvera, after Judge Augustin Olvera. There is also a very fancifully done version of Fort Moore sitting atop Fort Hill and roads leading out of town including Eternity Street, which headed—appropriately—toward the cemetery. While the geography may not be exactly represented, the compass demonstrates“that Los Angeles is crooked,” as D.J. Waldie once put it. The streets never did accomplish the perfect grid envisioned by Thomas Jefferson’s Public Land Survey System. No, instead the river and hills around the pueblo L.A. will forever be a little off center…geographically.