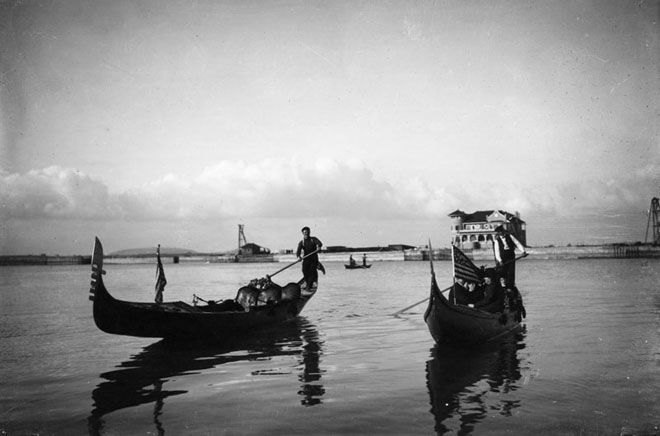 Think of canals in Los Angeles, and Venice immediately comes to mind. But several miles down the coast in Long Beach another seaside neighborhood boasts saltwater canals and picturesque bridges reminiscent of Italy’s Mediterranean shore: Naples.

Home today to multimillion-dollar houses, sightseers on gondolas, and a popular Christmastime boat parade, the island community was part of a tidal estuary just over a century ago. Surrounded by the wetlands of Alamitos Bay, where the San Gabriel River discharged into the sea, Naples was in 1903 only an ephemeral island inhabited by ducks and other waterfowl. At low tide, water lapped at its sandy banks. At high tide, it completely submerged the land.

The island’s marshy character did not deter Arthur M. Parsons, an experienced developer, from envisioning an Italianate village in the middle of Alamitos Bay. One of many Southern Californians who fancied the region as a sort of Italy-on-the Pacific, Parsons dreamed of red-tile roofs and canals teeming with gondolas and other pleasure craft.

After an engineer’s secret tests confirmed that the land could be improved, Parsons raised $500,000 from investors, bought the site from the Alamitos Land Company, and on August 23, 1905, began work on the development. Construction crews excavated canals around and through the island and, with the help of concrete walls and dredged-up sand, raised the island above the high-tide level. Railway baron Henry Huntington joined as a lead investor, routing one of his streetcar lines through the area. By 1906, a few houses fronted streets with Italian names.

The most logical name for Parsons’ development—Venice—was already taken, so he invited the public to choose a name. The public chose another famous Italian city—Naples—as the community’s namesake, despite the fact that canals and gondoliers are not among the highlights of an authentic Neapolitan vacation.